There’s something almost primal about Thanksgiving in our country. Who among us doesn’t have at least some early memories of the day be it related to travel, cousins, football, parades and, stating the obvious, food! Sure, there’s a lot to be said about the meaning of this wonderful non-denominational holiday. The importance of family/friends gathering and showing gratitude for the bountiful meal and what it represents is a powerful and meaningful tradition. The holiday even has a nice story about pilgrims and native Americans initially appreciating the beautiful land and its kind abundance together. But I digress, for the purpose of this story, dear reader, you can undo the top button on your trousers, dip a cinnamon stick into your apple cider and care not about the burnt marshmallow at the bottom of the oven.

The day begins really early in our house. My wife Laurie handles the turkey expertly and in a stress-free manner. When it emerges many hours later it will be juicy, golden brown and so excessively large that I had wondered if it would actually fit in the oven. My childhood memories of Thanksgiving in no way involve how the table may have looked but as a modern host the “table-scape” has become an important element. I’m not involved in this in any manner other than posterity related photography (see below) and (sincerely) praising my bride’s fine eye as the table looks clean yet absolutely autumnal with orange/red/brown details. There might even be a few pinecones involved. 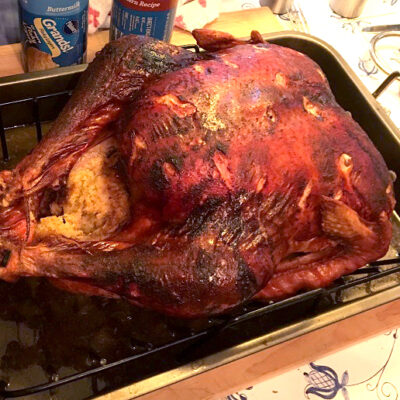 As Laurie crafts her turkey magic, I am tasked with preparing the stuffing and having it done before the bird goes in the oven. I make a lot of it. Enough to fill the bird and lots more as a supplement. Is there any more subjectively controversial food item than stuffing? It’s quite personal and it’s connected to the version one’s been most exposed to. When we first hosted the holiday years ago we’d have several different types of stuffing represented from both sides of the family. Inevitably (barely) civil debates would arise about which was superior. Every year my simple recipe (cornbread, onions, seasoning and an absurd amount of chicken stock) is exactly the same and our regular annual guests are now addicted. The other stuffing’s are now but a culinary memory. Another Pavlovian success story!

Speaking of subjectivity, I love the unique dishes of different family’s versions of the feast. Somewhere along the way I started making chopped liver (!) on Thanksgiving. Initially, it was just an appetizer that I enjoy and wanted to try making. People seemed to like it and Aunt Sally, a respected elder of our clan, would request it so now it is firmly entrenched in our delicious ritual. I did think that, perhaps, this ethnically defined dish might be contrary to the spirit of the day. However, when I learned that our friend Shira makes stuffed cabbage (really good!) for Thanksgiving, I concluded that slightly off-message dishes add depth to the experience. 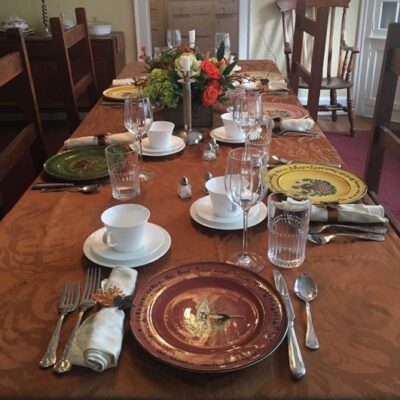 Dessert on the big day can be complicated. Too many times after overeating, I had been rendered into submission by the time dessert was served. (*Note to young over-eaters from a seasoned veteran: Go easy on the appetizers, mashed potatoes, stuffing and biscuits ). I’m a traditional dessert guy. Love the pumpkin pie. Our one departure is an ice cream turkey which is an ice cream cake shaped like a turkey with caramel skin, waffle-cone drumsticks and two flavors of ice cream representing white & dark meat (mint chocolate chip & rocky road respectively). Some consider it kitschy, I embrace it as a fully legitimate annual dessert item.

A happy element of the day is working with Laurie hosting. One of my duties is preparing two gravies. One is a light au jus that comes directly from the pan and the other a more formal gravy which is silky and luxuriant. One Thanksgiving, I looked in our fridge and saw a container of store prepared gravy! Was I insulted? Yes. Was I going to confront my wife while she was preparing a meal for 25 people? No. I may be sensitive but I’m not crazy. The “back-up” gravy controversy has faded, this year’s feast is fast approaching and I cannot wait!

Dan Levitz is an art dealer, Chappaqua dad and frequent essayist for Inside Press publications.