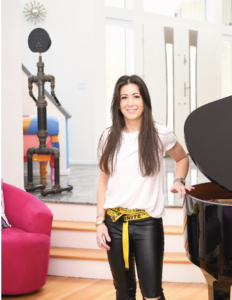 And JUST when I thought I had finally been called every name possible… It was December 2021 when I was asked to speak on a panel about Breast Reconstruction by The American Society of Plastic Surgeons. A few days prior to curtain call, my doctor’s office sent an email to the moderator with my background which introduced me as a “Previvor.” I had never heard the word, nor been accused of being one, and I’m nearing 39. BUT I assumed I knew what it meant, thought I liked it, and I flexed my muscles. So pumped that I immediately called my mom and was like “Guess what?! I have a name!!!!!!” I’m a Previvor, I’m not gon’ give up (sing it with me).

As I came down from the heroic high, I thought it would probably be a good idea to look up the true definition of the term. So, I drove to the North Castle Library, hunted down the World Book Encyclopedia Series, and got to work (fallacious). 16+ pages of Google search results, and hundreds of clicks later, I come to you with this:

Previously described as an “unaffected carrier,” the term “Previvor” refers to someone who has an elevated chance of being diagnosed with cancer due to a risk running through their family and/or a genetic mutation. FORCE, which stands for “Facing Our Risk of Cancer Empowered,” founded by Sue Friedman in 1999, acts under the principle that nobody should face hereditary cancer alone. This organization is credited for coining the term which Time Magazine declared a buzzword in 2007.

So, is it even a REAL word? Well, no, not according to Merriam Webster; “Previvor” is not a recognized word. From what I found, the exact definition lacks consistency from one publication to the next. For example, some medical websites reserve the term to solely describe people who have undergone a preventative surgery, while other equally credible websites reserve the term for anyone who is predisposed to an elevated risk of cancer, regardless of whether or not they had a preventative surgery. And while some studies show that many people who would be considered previvors don’t want to be “jinxed” by such a name, other studies presented individuals who only found a purpose to continue living after they identified as one.

It’s really simple though. You see, there is a difference between someone who has been diagnosed with cancer and someone who’s been told they have a high likelihood of hearing that same news. Read that again. While they will end up using the same doctors, waiting rooms, and gauze, their experiences and struggles are vastly different. We all know that someone diagnosed with cancer will be referred to as a “Survivor,” but what should we call those other people that also need to be medically treated and mentally cradled??!! EXACTLY…

An increase in genetic testing over the decades has left the human race with a rather large community of people who remain undiagnosed, yet aware they’re predisposed to an elevated risk of cancer. That’s a heavy suitcase to walk around with and it left many people struggling and looking for somewhere to turn. These “people” needed a name. A differentiator. An umbrella to fall under, regardless of who, what, where, when or why we needed a name for people who went in for genetic testing and got bad news. And now you know what those people are called; “Previvors.”

And this is where the rubber meets the road…

In July 2000, at the age of 46, my mom was diagnosed with stage two breast cancer. She underwent a mastectomy and required chemotherapy. I was 16 years old and thought my mom was going to die.

Fast-forward to February 2016–halfway thru my first pregnancy, my mom goes in for genetic testing and boom, positive: clinical mutation identified PALB2 (this is a BRCA carrier/ related mutation). Four months after I give birth to my son, boom, I tested positive: clinical mutation identified PALB2. The chances of me being diagnosed with breast cancer pre-menopause was extremely high, like stupid high. I gave birth to my daughter in May 2018 and underwent a bilateral prophylactic mastectomy in November of that same year. Three additional and extensive reconstructive surgeries followed in February 2019, September 2019, and March 2021.

My journey was supposed to end with a final reconstruction in February of 2019. The two surgeries that followed were unanticipated, avoidable, and quite honestly, tragic. I suffered through chronic pain, capsular contracture, herniated discs, guilt, and far too much freaking time away from my children (exactly what I was hoping to avoid by having the preventative surgery in the first place). The “Why Me’s?” only came to a stop when I started to embrace my new identity and find purpose in doing so as a patient advocate. They stopped when I found out that I wasn’t alone. And yes, it also felt nice to know that people like me, Previvor’s, have a community.

Being called a “Previvor” made me feel tough. I never had cancer but I did go through a lot. A lot of different things than a Survivor would, but still things that forever changed me and my family. When I went in for genetic testing, I never could have imagined how much my identity would change; not just my body.

Let me leave you with this:

Go in for genetic testing with a plan to address whatever outcomes may arise. You would be foolish to think that hearing you have a genetic mutation really won’t impact your life that much. Have a plan. Even if it’s only a mental one.

THANK YOU. And I mean that. The opportunity to share my story is without a doubt, the best medicine.

And finally, if you or anyone you know will be facing breast reconstruction, whether it be preventative, post-diagnosis or even cosmetic, find me. Let’s talk.

Jennifer Drubin Clark, mother of 2, creative junkie, and the co-founder of North Castle Grounds, Inc.; a local non-profit organization funding enhancements to the parks and recreational programs in her community. Jennifer is also a Previvor, Patient Advocate for OTM Breast Reconstruction, Parks & Recreation Advisory Board Member for the Town of North Castle, Professional Writer, Comedian, and Unprofessional Artist & Designer.