On Wednesday, June 13th, at the American Legion in Armonk, the Mid Westchester Elks Lodge held their first Law Enforcement Appreciation Awards Dinner. Here, a group of five officers and detectives from the surrounding area, Steven Vitolo, Lauren Valentino, Steven Mulcahy, James Chiarlitti, and Arcangelo Liberatore, were honored for their outstanding acts of heroism and dedication on the job. Over 40 co-workers, family members, and elks were gathered at the event to watch the ceremony. 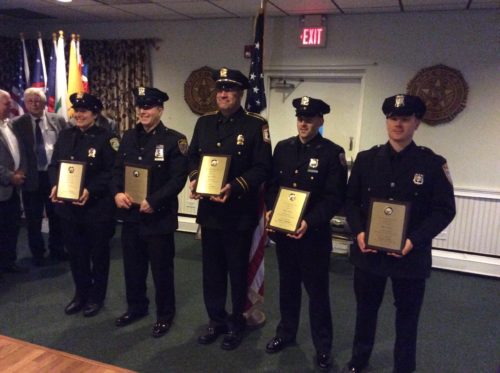 On the eve of Flag Day, a holiday that celebrates the adoption of our familiar red, white and blue emblem, strong feelings of national pride were evident at the event. To kick things off, the Pledge of Allegiance was uttered in unison as the American flag stood tall at the front of the room. Later this flag was used in a service, observing its history and significance. The Elks furthered these patriotic sentiments through the singing of God Bless America.

The Elks Club (officially known as the Benevolent and Protective Order of Elks), is a fraternal organization whose primary mission is to improve the communities in which they serve. One big way that they do this is through their commitment to helping those who risk their lives to protect our country: veterans and enforcers of the law.

These sacrifices were commemorated at the event when a moment of silence was ordered for police officers killed in the line of duty. After this silence, the Emerald Society of Westchester, a band made up of both former and active police officers, played God Bless America to further honor those fallen.

In regards to sacrifices officer James Chiarlitti, one of the event’s honorees, stated, “People see what we do online and on TV, but they don’t see us working on three hours of sleep and doing double shifts.” He also brought up that, “our families don’t see us on birthdays and holidays and anniversaries,” revealing one of the overlooked things that police families are often forced to give up.

Chiarlitti, a Police Officer for the town of Pleasantville and son of the former chief of police, remembers playing in the station as a little kid. After fulfilling his dreams of becoming a Police officer with the NYPD, he returned to the very station that used to be his stomping grounds. James was complemented at the event for his work ethic, his chief, Erik Grutzner, saying, “he gets it, he understands what this job entails.”

Similarly, Detective Lauren Valentino of the Mount Pleasant Police Department was recognized for her dedication. Formerly a school teacher, Valentino works closely with youth interested in careers in law enforcement, both through the Law Enforcement Exploring program and the Youth Police Academy in Mount Pleasant. When it was mentioned that she had been working at the station for over 17 years she exclaimed, “time flies when you’re having fun.”

Detective Steven Mulcahy of the Pound Ridge Police Department was also complimented on his work ethic. In addition to serving as a Detective, he also works as an EMT and a Firefighter. Last year he was one of the first responders to a horrific double homicide in which a father killed his wife and daughter.

Another Steven, Police Officer Steven Vitolo of the North Castle Police Department, was praised for his split second decision making when he was the first responder to a fire in the Wampus Close housing development. If it weren’t for the fact that he was able to momentarily control the blaze with his fire extinguisher, the 18 house development may very well have gone up in smoke.

Finally, Police Officer and local celebrity Arcangelo Liberatore of the Irvington Police Department was commended for his bravery in handling a coyote attack. Liberatore was off duty with his family when he noticed a coyote attacking a five year old girl. He quickly fought off the coyote with his bare hands, restraining it until backup could arrive. It was later found out that the coyote was rabid.

These five officers should each have a whole article dedicated to telling their individual stories, but law enforcement don’t often receive thanks that they deserve. As officer Chiarlitti explains, “You don’t take this job to be thanked, it’s kind of a thankless job, but it’s nice every once in awhile to bring family together and be thanked for the work you do.”

The Elks Club, which is celebrating its 150th birthday this year, plans on making this an annual event and are considering expanding the ceremony to include all types of first responders. To find out more about the club and all their charitable efforts click here.

Derek Rosen (HGHS Class of ’17) is an intern for the Inside Press this summer. In September, Derek will be entering his sophomore year at Syracuse University, where he is a communications major.