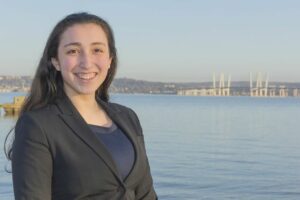 Yehudis Gottesfeld, a 24-year-old Rockland resident, says her decision to run for office came after a meeting with a policy director for New Consensus, an advocacy group backing the Green New Deal.

As a chemical engineer working on nuclear and environmental issues, Gottesfeld agreed to meet with the group. But she says she was put off by what she describes as their unrealistic views of quickly transitioning to renewables and their flippant attitude towards the cost required.

Gottesfeld went home and reached out to Republican groups including Empower America, a conservative advocacy group, which encouraged her to run.

Gottesfeld says the most urgent concern facing the country is getting the economy back on track following the COVID-19 shutdown.

“At the end of the day, if you want to recover you need to empower people to get back on their feet, get their small businesses back and running, reopen the economy so people can provide for their family,” she says. “Once the economy is open, we have to make sure this doesn’t happen again.”

To ensure that the country’s economy and security is not dependent on China, Gottesfeld supports incentivizing businesses to return production to the US through tax breaks.

Gottesfeld favors a flat tax at a rate that would be revenue neutral against current tax law. While she says she understands the decision to cap the SALT deduction, she said help is needed to alleviate the tax burden residents in Westchester and Rockland face.

To cut spending, she says she would address waste in the federal budget. Gottesfeld points to large omnibus bills as part of the problem, as these massive spending plans impede a sufficient examination of government spending.

Gottesfeld sees competition as the key to lowering healthcare costs and would like to see insurance sold across state lines. To lower drug prices, she favors enacting a “most favored nation” policy which would force drug companies to sell price at the lowest price they are sold abroad.

Gottesfeld also sees the free market as the key to reducing carbon emissions.

“A lot of companies are going green, and the free market is allowing that,” she says.

In foreign policy, Gottesfeld favors maintaining a strong alliance with Israel and standing up for U.S. interests abroad.