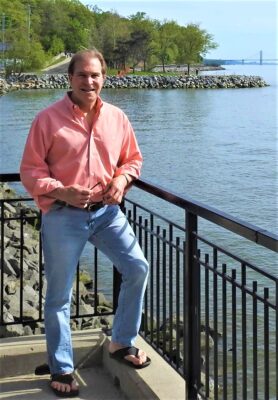 Growing up in Briarcliff Manor had such a profound impact on author Tom Leihbacher that he set his first novel, A Gift Most Rare, in the idyllic village. Published in 2020, the story is a coming-of-age tale set at Christmastime in the 1970s inspired by Leihbacher’s own adolescence in Briarcliff and the amazing memories he made there.

“It was just as golden and wonderful as you could imagine. Briarcliff was a microcosm of life in the USA back in the 60s and 70s – a small town with really close family and friendships all over town, it made everything more cohesive; we had each other’s backs and were there for each other.” Leihbacher grew up the youngest of three sons. At the University of Florida he majored in advertising and marketing and got a job in NYC right after graduation. It was then that he found an apartment in the Scarborough/Briarcliff area and decided to set down roots, a decision he is grateful to have made.

Leihbacher grew up attending the Briarcliff Congregational Church and married the daughter of the minister. He and his wife Rachel raised their son, Tom Jr., in the Tree Streets neighborhood and Tom Jr. and his wife also live in the local area now. He concluded after years traveling all over the U.S., “if ever you lived in Briarcliff, no matter where you’ve gone since, you’ll always call Briarcliff home.”

Leihbacher regularly gets together with a group of high school friends to reminisce about favorite spots in the area. “We all agree that the single most beautiful spot here is the 16th green at Sleepy Hollow Country Club, looking at the sunset over the Hudson River.” He still sees Briarcliff as a town that emphasizes family and children, especially when the whole town comes out for sporting events such as football and basketball. In addition, he really enjoys the walkability of town. “I like to take the dog for a walk through the tree streets and the village. The downtown area is great–everything you need is there. We have something here that rivals the most beautiful places you can find.”

Taking inspiration from life in Briarcliff, Leihbacher decided to try his hand at writing fiction. After spending many years in the advertising business, his career took a decidedly different turn. “I had written lots of ad copy but also studied fiction writing. In my later years, around age 60, I had an inspiration for a Christmas story.” Leihbacher created a story outline but couldn’t get himself going and didn’t understand why. “I started thinking I had to nail down a setting first and knew I wanted a Norman Rockwell/Courier & Ives feel. It finally occurred to me: I grew up and live in a setting that fits the description, why not set it in Briarcliff?”

So that’s what he did. “I took the dog for a walk–I do my best thinking that way, and thought, why don’t you draw from people you know to create characters.”

Many of the characters in A Gift Most Rare are based on people Leihbacher grew up with including his late father-in-law Reverend Higgins and Mr. Welden who ran the deli he frequented as an adolescent. He also drew on characteristics from those he grew up with in town.” For many who grew up in Briarcliff, Leihbacher’s book is an enjoyable trip down memory lane. 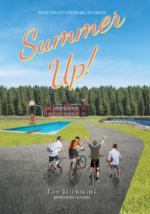 Summer Up, the next installment, takes places two years after A Gift Most Rare, with the same cast of characters. He calls it a “God-honoring summer tale capturing the fun and excitement of summer break from school.” The story also contains a timely anti-bullying message. Victory Lap is the third planned book of the series, with the characters now seniors at Briarcliff High School taking their own “victory lap” before heading off to college. As Leihbacher says, “I had a hobby that turned into a new career–it has been super fun. The success of the first book was enough to go for a second one.”

In addition to writing, Leihbacher also finds time to volunteer both with the youth group at Faith Lutheran Brethren Church, and at the Ossining Food Pantry. “For me, kids hurting and people who don’t have enough to eat touches my heart and that I want to help with. Also, kids who are looking for a good, positive environment–those are three things that most pull at my heart.”

For more information about Leihbacher and his books, please visit tomleihbacher.com