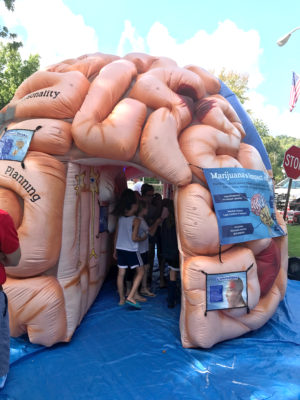 Uniting the community and making our younger residents feel that they have a safe place to turn can be challenging, even in our welcoming town. Enter New Castle United for Youth (NCUFY). Formed in 2016 as an outgrowth of the Coalition for Youth (CFY), NCUFY is a supportive, encouraging resource that uses youth-focused strategies to promote a safe and healthy community.

The committee’s founding members, Steering Committee Chairperson Lea Barth and Steering Committee members Leslie Kuhn and Victoria Goodman, were originally members of the Chappaqua Central School District’s R21K PTA Committee. They started attending the monthly meetings of the Westchester Coalition for Drug and Alcohol Free Youth and soon realized they could re-invent the Town of New Castle’s drug prevention committees following this model. Working with members of the community, CFY applied for the federal Drug Free Communities grant which was awarded to CFY in 2016. This grant gives the Coalition $125,000 a year, renewable annually for up to ten years, to fund prevention work in the Town of New Castle.

“Our goal is to promote a positive message and help students and teens feel empowered to make positive choices. We want them to feel confident making social choices that are right for them,” says Barth. To achieve this, NCUFY brings together parents, youth, the Chappaqua School District, the Town of New Castle, police, local businesses, medical professionals, local media, religious organizations, and others to work together to apply data-based approaches to influence the way kids make social decisions.

“We are fortunate to live in an open and accepting community. Our kids have the capacity to accept the choices of others,” states Kuhn, who has helped to spearhead several initiatives to engage local teens. Last October, NCUFY partnered with the school district to bring the motivational speaker, Ty Sells, to Horace Greeley High School. Sells discussed the importance of developing positive relationships, and the value of open conversations between parents and children about drugs and alcohol. Dr. Steven Dewey, a NYU Medical School neuroscientist and researcher was another guest that NCUFY invited to speak at Greeley’s iLab and science research classes this spring. He helped elucidate the science behind the impact of drugs and alcohol on a teenager’s brain.

In addition to participating in Community Day, with a hard-to-miss, enormous “blow up” brain, and hosting a booth at the summer concerts, NCUFY funds a prevention specialist who splits time between Bell Middle School and Seven Bridges Middle School and hosts after school clubs and presentations. Goodman hopes this specialist will promote a “good culture shift and great prevention programs.”

This summer, NCUFY hired two young professionals, a social worker and a counselor to run a summer teen internship program. With over 20 students participating, this group was charged with researching potential initiatives and information, as well as developing positive prevention messages that appeal to an audience of their peers. Barth enthusiastically notes that the “kids have been great.” Kuhn adds, “We have smart kids in this community, when you give them the information, they can process it and draw their own conclusions.”

The NCUFY Steering Committee lauds the efforts of the Town of New Castle, which they find to be exceptionally helpful to and supportive of NCUFY’s initiatives. The town raised age restrictions for buying vaping equipment and cigarettes to 21; smoking is prohibited in town parks; and the town has prevented vaping stores from renting space near Chappaqua schools. “Rob Greenstein is a doer. He is consistently supportive and responsive. So is Jill Shapiro,” notes Kuhn.

And NCUFY is growing. “When we applied for our initial grant, our objective was to change people’s perceptions about teen alcohol use, hopefully reducing the amount of teenage drinking,” notes Barth. Now, they are working to increase their social media traffic, to continue increasing partnerships within the community, and to get across their consistent, positive message of preventing substance use and abuse. Long-term, the Steering Committee hopes to build something that is sustainable; they want to build something that can be passed down to a new generation of New Castle’s parents, administrators, and influencers who can support this community’s youth.

While the Coalition has yet to determine whether they have encouraged a substantive behavioral change in New Castle’s youth, Goodman says, “All of this started a great conversation.” Hopefully, this conversation will resonate throughout the community.