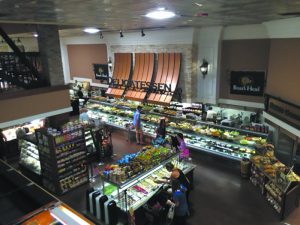 Residents and merchants alike have been clamoring for a new supermarket in Millwood Plaza ever since A & P declared bankruptcy and closed. The long anticipated wait though will soon be over. DeCicco & Sons., a family-owned supermarket business based in Westchester announced plans earlier this month to open in Millwood Plaza by this winter.

New Castle Town Supervisor Robert Greenstein said he anticipates a December grand opening date. Construction and demolition on the site was visible in July as the new owners began gutting the store and adding new refrigeration systems and environmentally-friendly features.

For months, local residents tried to persuade Trader Joe’s to take over the lease with a petition started on the Chappaqua Moms Facebook page. Greenstein and Town Board member Adam Brodsky played a pivotal role in getting DeCicco & Sons on board, working with Dodd Farber, owner of Dodd’s Liquor City which has been in the Millwood Plaza for 42 years.

Brodsky, who has a background in commercial real estate, conducted extensive market and demographic research along with Greenstein and other board members to identify a supermarket that would be a good fit for Millwood.

“We looked at affluence, population density and educational background within a five-mile radius. We found that Millwood has amazing demographics and so much potential, so much upside that it was an unidentified opportunity,” noted Brodsky. The proximity to Route 100 and the Taconic State Parkway was also a key benefit that “helped us advocate for why DeCicco’s should come here.”

Brodsky and Greenstein did identify other supermarkets such as Trader Joe’s and Balducci’s for the location as well. Overall, they were initially surprised at how responsive the supermarkets were to them. Brodsky said he then took that as “an opportunity to advocate for our community.” Dodd Farber is an Armonk resident who frequents the Armonk DeCicco’s. He approached the DeCicco family at their store in Armonk Square.

Farber felt strongly that the Millwood locale would be a “homerun” for a new DeCicco’s. He felt that the store could be a draw not only for New Castle residents but also ones from Ossining, Croton and Briarcliff. “DeCicco’s has high quality, good selection and great service at a fair price,” commented Farber. “One Sunday I decided to approach the DeCicco family in their store. I told them I have a business in Millwood and that it would be a great place for them to open.”

That Monday morning John DeCicco Jr. and Sr. walked into Dodd’s liquor store and asked [Dodd] if he had an hour. Farber took them around the area in his car and explained the local demographics. “When he [John DeCicco Sr.] got out of my car, he said I think we are going to try to go for it.”

DeCicco & Sons operates six other supermarkets in the area, including the Armonk Square location. “We will have similar offerings to our Armonk store and although that store is a little larger we are going to try to maximize the retail space that we have in Millwood,” noted John DeCicco Jr., who manages the Armonk store.

The store will feature a wide selection of produce, organic items, deli, seafood, meats, cheeses and other gourmet and specialty prepared items. Each store though has unique features and this location will incorporate their first sushi bar where customers can sit and watch the fish being prepared by chefs and then eat it on-site. Like the Armonk store but smaller in scope, the Millwood store will also feature a craft beer sampling area and an additional dining area.

Extensive interior renovations are already taking place. “The interior of the store will have a “New England/Nantucket/Cape Cod feel to it to blend into your downtown,” noted John DeCicco Jr. The store will have a new refrigeration system which will be HSF-free with no ozone-depleting materials in it.

Jon Brolin and his wife Tamara Brolin, nine-year residents of New Castle feel like having A & P closed has hurt the businesses in Millwood Plaza. Mrs. Brolin echoed the sentiments of several residents who now find themselves traveling further afield for grocery shopping. “DeCicco’s will be a big win for us because they have a lot of allergy-free products too which is important for my family,” noted Mrs. Brolin. “I’m very happy to have a high-quality supermarket so close to home. It will be great for the other merchants in this strip to have DeCicco’s as an anchor store,” added Mr. Brolin.

“I think DeCicco’s is going to be a great thing for Millwood and bring people to the area who haven’t been here before. I think it is going to transform and add a lot of value to Millwood,” summed up Brodsky.

Stacey Pfeffer lives with her husband and three young children in Chappaqua. She has written for New York Family Magazine, Kveller.com, Westchester Parent and Inside Armonk. She hopes to be at DeCicco’s on opening day in Millwood and sample some craft beers.