Farber’s position became official on October 19 after being appointed by the Library’s Board of Trustees.

“We are delighted to have him join our staff,” said Ronni Diamondstein, the library board Acting President. “He will be a great asset to our community.”

Farber succeeds Pamela Thornton in the role she served for the last 13 years. Thornton retired this past August.

Farber was the Director of the Somers Library position since 2015. “Andrew is knowledgeable, personable and creative. He brings to us an extensive IT background along with experience in management, budgeting, long range planning, grant writing, staff development programs and community outreach,” said Diamondstein.

Farber has worked successfully with the Somers Library Board and the Friends of the Library to create and implement policies and programming for both the patrons and the staff, according to a release provided by the board. “He created a partnership with Somers’ largest hamlet, Heritage Hills, and also expanded the library’s community outreach by creating new partnerships with local businesses and schools.”

Farber currently chairs the Westchester Library System Public Library Directors Association Technology Committee. He began his career at the Greenburgh Library working there for 16 years ultimately becoming the Young Adult Services Librarian, a period that he looks back on fondly.

“I was incredibly rewarded by my work with teenagers,” said Farber, who grew up in Ossining. “I felt I could really influence young lives. It was hard to leave, but Somers presented a new and bigger challenge.”

Commenting on his new role in Chappaqua, Farber said he first planned to “immerse myself with policies and procedures, get to know staff and any concerns, and introduce myself to local groups, before making any changes.”

He noted that libraries today were historically already adding more online services, pre-Covid. He said we can “expect even more visual digital streaming such as online movies and concerts on top of all our usual audio/electronic books.” 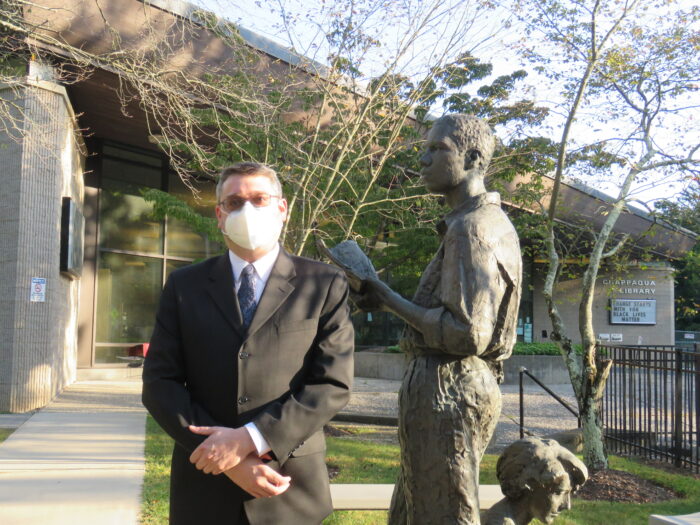 Given that the library is an invaluable asset to the community during ‘Home for the Holidays,’ I asked Farber what might be in the works for the early winter. He offered: “We will be doing holiday type programming; perhaps virtual tours of different locations which we can share with the public at no cost.”

As for the future of library going, he added that we may see “more and more ‘normalization’ too as the pandemic tapers down. “I plan to work closely with the staff and board to see what their plans are for movement in that direction, and to see how we can proceed safely.”

To keep up with programs at the Chappaqua Library, visit ChappaquaLibrary.org.