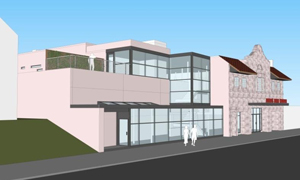 The Jacob Burns Film Center (JBFC) announced today that construction has begun to add two new theaters on the third floor of its cinema complex. The new theaters will provide JBFC with 80 additional seats. The construction is contained within the existing footprint of the building and is expected to be completed by January 2015.  The JBFC Theater will remain open during construction.
In addition to the new theaters, the JBFC will reconfigure the Jane Peck Gallery into a café and community gathering space for members and the public. The final piece of this creative expansion will be to replace all of the original seats in the three existing theaters. Both of these projects are expected to be completed by fall 2015.
“The new theaters will provide a greater opportunity to present vital new films from around the world, as well as innovative programs curated by JBFC staff, international fellows, emerging artists, and partnering organizations,” said JBFC Programming Director Brian Ackerman. “We also look forward to creating a physical space that will encourage dialogue and connection.”
“We need a facility that can enable us to fully execute our mission,” said JBFC Board Chair Hugh Price. “Many people embrace this important next step, as we have already raised 60% towards our fundraising goal to meet the cost of the project. We now look to our community, as we need broad financial support to successfully complete every essential component of this campaign.”
“This is a natural evolution in the life of the JBFC and a direct response to an insatiable demand from members, filmmakers, students, and teachers,” said JBFC Executive Director Edie Demas. “It is also a shining example of a community coming together to learn, grow, and relish in the shared experience.”
Nat Hoyt, the original lead architect for the conversion of the old Rome Theater into the three-screen JBFC Theater, in 2001, will be working with the team who built the JBFC’s Media Arts Lab in 2009, KG&D Architects of Mt. Kisco. Yorke Construction Corporation of Manhattan is the building contractor.
To learn more about the campaign to expand and renovate the JBFC Theater, contact JBFC Development Director Judy Exton at jexton@burnsfilmcenter.org or 914-773-7663, ext.414.
The Jacob Burns Film Center is a nonprofit cultural arts organization dedicated to: presenting the best of independent, documentary, and world cinema; promoting 21st century literacy, and making film a vibrant part of the community. Located on a 47,500 sq. foot, three-building campus in the center of Pleasantville, the JBFC is just 30 miles outside of New York City. Since the opening in 2001, over 2,000,000 people have seen over 5,400 films from more than 40 countries The campus includes the 27,000 sq. foot Media Arts Lab, the JBFC’s state-of-the-art education center, a creative and educational community for storytellers in the digital age, offering one-time workshops, intensive courses, and weekend programs for children and adults of all ages.