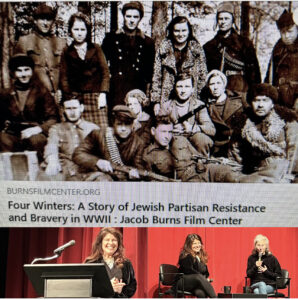 Can you imagine climbing through an unlikely opening and hurling yourself off a speeding train (while your beloved family members huddle together, terrified and exhausted) to take your chances at surviving so that you can escape arrival of almost certain murder at the death factory, Treblinka?

Or of attempting to convince others to take that chance with you? So that you can both LIVE and one day tell the story? To tell what happened–a reason to live that Holocaust survivors collectively have shared in many documentaries.

To jumping anyway when others would not or could not?

In Julie Mintz’s riveting and inspiring documentary Four Winters, we learn of such unimaginable circumstances and also mind bogglingly courageous acts of Jewish resistance through the testimony of eight  survivors who were members of the estimated 25,000 Jewish Partisans in the forests of World War II Poland, Lithuania, Belarus and the Ukraine. In Mintz’s discussion following the movie with Bruni Burres, the curator of the Jacob Burns Film Center Jewish Film Festival, we learn that only one of the survivors Mintz worked with to tell their stories and produce this film as authentically as possible, is still with us today for the film’s release. A takeaway reminder to me that the survivors are leaving us. A reminder that so are their stories. So we must honor them. And this film, honors them immensely. 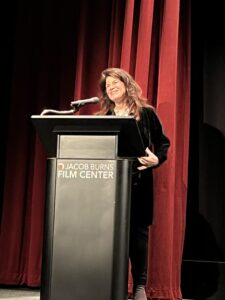 If I may go on. I also don’t consider these spoilers as you MUST see this wonderful documentary to understand its edge of your seat quality, and my own words aside, you MUST hear the stories from the survivors themselves to truly digest the Jewish Partisans story and the Four Winters theme of perseverance.

Can you imagine walking for miles in a weakened state in an expansive, eerie forest in the cold and the snow, with only the glowing eyes of wolves in the distance to guide you, without survival gear or survival skills per se, at different junctures being hunted down like animals for slaughter by the sick Nazi regime and its unholy web of spies and collaborators?

It was a story I was startled and almost embarrassed to have never heard before, or have heard about in snips and pieces, as more folklore. The survivor witnesses in Four Winters weave a tapestry of this most remarkable aspect of Holocaust survival, of Jewish survival. Julie Mintz has lovingly, painstakingly helped each of these dear souls revisit and recall details of those horrific times, so that the story, each story, the collective story, can be released into the world, and so that these survivors can be celebrated and embraced not for what they survived, but for their courage, for the lives they helped save, for whatever evil they conquered or thwarted too against all odds.

None of us really could imagine, and no doubt the survivors who describe their experiences never could have either preceding the horrific genocide that ensued. Or how they eventually banded together in groups and underground, camouflaged bunkers to form true fighting units sabotaging and killing Nazis at assorted opportunities, and surviving against all odds over four endless, brutal winters, often starving, often not knowing what day it was, or what the future held. Early in the film: footage of their happy and productive lives, vacationing in pre-Nazi invasion Poland.

As we approach International Holocaust Remembrance Day tomorrow, I am grateful I had the opportunity to watch the pre-screening of Four Winters yesterday. As the subject matter never stops hitting too close to home (I am a child of Holocaust survivors; most of my family perished), the usual trepidation I feel watching the footage of crimes perpetrated against humanity by the Nazis never goes away. But this story was incredibly uplifting in that we much more rarely hear about the resistance efforts to the Nazi evil. The Jewish partisans collaborated with Polish and Russian partisan units in the forests too. I am eternally grateful to every astoundingly brave and moral person of every religion and race who courageously resisted and fought the seemingly endless atrocities to save innocent lives at grave risk to their own. I’m in awe of the courage it took to save themselves. I’m eternally heartened to learn and proud to know that included a sizeable number of Jewish persons, too.