When local mom Anna* routinely dropped her toddler at a sitter’s home, it never occurred to her to ask about guns. The sitter came highly recommended, had been diligent about discussing food allergies and even kept her pets in a separate area of the home. Only when Anna read about an accidental shooting between two toddlers in North Carolina did it occur to her to approach the sitter and ask whether there were any firearms in the house. Expecting to be reassured that guns were not an issue, Anna was shocked when the sitter readily admitted that three guns were in the home but “put away where the children couldn’t get to them.” After a few sleepless nights, and well aware that, had she not asked, there’d be no changes to her or her toddler’s routine, Anna decided to find a new sitter for her child. As the saying goes, better safe than sorry.

Stories like Anna’s aren’t often widely shared first-hand. They’re the heard-from-a-friend-of-a-friend anecdotes that moms and dads tell one another when they meet for coffee, head to the park or stand on the sidelines at soccer games. When these cautionary tales ARE shared more directly, it’s too often because something unimaginable, something that should never have happened actually did.

That is why, over the last three years, as mass shootings have stunned and frightened the public, many gun safety groups have come together to address a related problem that is sometimes overlooked: the accidental shootings of children, often in their own homes.

According to the National Centers for Disease Control and Prevention, there were at least 140 unintentional firearm deaths for people aged 0-19 in 2011. However, the actual numbers appear to be much higher. A New York Times report from September 2013 revealed that accidental shootings are seriously under-reported: “The undercount stems from the peculiarities by which medical examiners and coroners make their ‘manner of death’ rulings. Choosing among five options–homicide, accidental, suicide, natural or undetermined–most medical examiners and coroners simply call any death in which one person shoots another a homicide. These rulings can be wildly inconsistent…Even self-inflicted shootings that are clearly accidental…can wind up classified as homicides.” 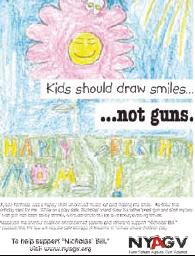 Saratoga Springs resident Oksana Naumkin knows all too well the nightmare of losing a child to accidental gunfire. On December 22nd of 2010, her 12-year-old son Nicholas was visiting a friend when the unimaginable occurred– said friend accidentally shot Nicholas in the head while playing with his father’s unlocked and loaded handgun. Following this preventable tragedy, Oksana started to advocate for a law that would require the safe storage of guns in the home; the proposed law, Nicholas’ Bill (S.7822/A.8293), is named for her son.

Twenty-eight states plus the District of Columbia have some form of safe storage law, but, as of press-time, New York State does not. We are fortunate in that Westchester County (along with New York City) does have safe storage laws. Still, we would all benefit from a state-wide passage of Nicholas’ Bill. The New York State Coalition for the Prevention of Child Access to Guns is comprised of over forty organizations around the state that have joined Oksana in advocating for Nicholas’ Bill.

There is something else concerned parents can do right now: ASK. The ASK campaign–Asking Saves Kids–offers a very simple solution to a tricky social situation.

Basically, and per its acronym, ASK suggests that all parents sending their children to another person’s home for a play date (or anywhere one may have concerns or questions) simply ask if guns are on premises and whether (if they are) they are securely stored. If the answer makes anyone uncomfortable, the play date should then be renegotiated so that all parties feel comfortably satisfied.

A Chappaqua dad who keeps several guns for sport explained that his weapons are stored in a gun safe anchored both to the floor and wall with ammunition stored separately. He added that he believes the majority of gun owners in our area keep their guns locked and stored carefully too. However, he thinks there are those who may not readily admit they have guns for fear other parents may not allow their children over for play dates. As he noted, “People feel that they have second amendment rights but they have a fear of expressing it, at least in our area, particularly after the tragedy at Newtown.” 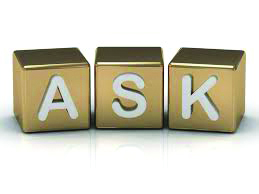 Putting political views aside for the sake of all our children should be something we, as a community, should be able to accomplish. Adopting ASK helps make that easier; with more parents ASKing, the “gun” question becomes less fraught and more part of everyone’s comfort zone when play date-planning. Let’s ask, not judge. Strategize not stigmatize. Anna asked. Now it’s our turn to ASK. And to contact state representatives in support of Nicholas’ Bill (S.7822/A.8293). With everyone’s help, our children will enjoy drawing pictures (not guns) happily ever after.

*Names and defining characteristics have been changed.

Dawn Greenberg is an eight-year Chappaqua resident and the Executive Director and founder of the Chappaqua Children’s Book Festival. She’s a member of Million Mom  March/Northern Westchester chapter. She always asks about guns where her eight and 11-year-old boys play.