The Armonk Fire Department is one of a handful of fire departments in Westchester County which combine fire and EMS services into one department – which makes regular recruitment efforts indeed critical. With that dual role in mind, Armonk Fire Chief Carlos Cano stressed the importance of regularly recruiting volunteers with varying schedules to efficiently serve the town.

“The more volunteers you have, the better,” Cano said. “Then you have a variety of people that work in different fields, and their schedules are different, so it becomes easier [for the department] to cover calls.”

Already, Cano says that the department has had to hire a paid EMT to cover weekdays while most volunteers are busy with work or other commitments. This shortage of work makes finding volunteers with varied availability even more important.

For the most part, however, Cano says that the Armonk Fire Department has been faring very well as far as recruitment. The department consists at the time of this writing of over 20 EMTs including one who just joined this summer.

“We have people who come in that want to become either EMTs or firefighters, and sometimes our fire guys serve as ambulance drivers and run it as attendants and catch a little bug; they say, ‘you know what, I can do this,’ and they become EMTs,” Cano said. “Or vice versa, we have some people who come in as EMTs and go on fire calls, then think, ‘that looks like fun’ and they want to take a fire class.”

The department, he shared, sees upwards of 1,100 emergency calls per year, averaging to three or four calls per day. Cano calls it “demanding,” but the more volunteers who can respond to calls, the better.

How then can one become a volunteer firefighter or EMT? Cano says that there is no prior experience required for those who are interested in becoming members, and that the department provides training for whichever path volunteers choose to follow.

“You can take the Firefighter 1 class at the training center in Valhalla or sign up for an EMT class at one of the different venues where it’s offered,” he explained. “For firefighting, once you become a member, we will help you or tell you where to go. You can also sign up for updates from the county, and then every time there’s a class offered, you’ll get notified via email to come in for a class. The same goes for EMTs.”

Firefighter 1, the training course for firefighters, amounts to roughly 137 hours of training. For EMTs, Cano says the training is closer to 210 hours. These are typically completed on two or three nights during the week and occasional full days on Saturday for about four months total.

To enroll for a volunteer role in the department, visit the department site, armonkfd.com, for an application. Or consider talking to representatives from the department first at one of their popular outreach events such as EMS Week or Fire Prevention Week. These are announced via posters hung up about town, and on social media. 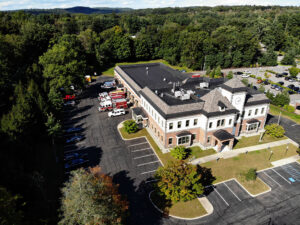 The Armonk Fire Department has also worked with some of the Byram Hills district schools to emphasize the importance of fire safety measures in the home for Armonk families. Cano says that schools will sometimes bring kids to visit the firehouse and learn from the firefighters.

“When I do those tours for the kids, I use those 45 minutes to talk to the parents and educate them about us, because a lot of people think that we’re a paid department. We tell them that we’re always looking for people, and if you want to volunteer, here we are!”

Other ways that the department reaches out to the community and promotes safety in the home is through free CPR courses on the first Thursday of each month led by H. C. Crittenden Middle School nurse Julie Gallagher. Classes take place at the firehouse from 7-9 p.m.. The classes themselves are free and it’s $22 to purchase a certification card from the American Heart Association. The email to register for CPR training is cpr@armonkfd.com.

As far as volunteer work with the department itself, Gallagher shared a similar sentiment to Cano regarding balancing outside commitments. “Although it is a volunteer position, most of our members spend between 10 to 20 hours per week responding to calls, training with other members, and cleaning and inventorying the apparatus,” she said.

“Everyone has a ‘pay job’, so it can be a very tricky balance,” she continued. “Often, the time commitment to the fire department eats into our home lives because emergencies happen at all hours of the night and day. Our spouses and family members need to be very understanding! Most EMS calls last an hour, but a working fire could keep you away from home the entire night!”

Working together so often, and in such stressful conditions, makes for a unique bond between members of the firehouse. Gallagher feels that the relationship is like “a second family.”

“We work together helping people, their homes and local businesses and to do this, we need to work as a team,” she explained. “Firefighting and EMS are jobs that you cannot do single-handedly! No-one can lift a patient onto a stretcher or put out a fire by themselves. We truly need each other to take care of emergencies. We trust each other with our lives, because many situations that we are involved in are dangerous. When you join our fire department family, you should be open to making new friends, learning many new skills, and doing physically demanding work as a team.”

Indeed, the Armonk Fire Department emphasizes the role in protecting one’s community and picking up new skills on their website, noting that you can expect “a little hard work, a strong sense of community, the benefits and excitement of learning new skills and… a desire to help neighbors in a time of need.”

Members of the Armonk community interested in joining the department can also stop by the firehouse on Mondays at 7:30 p.m. to watch their weekly cleanup and drills and speak to volunteers and firehouse staff about what membership entails.