June 7, 2019–A group of public and school officials representing New Castle, gun violence prevention activists, clergy and dozens of residents gathered wearing orange for National Gun Violence Awareness Day inside the Chappaqua gazebo with a shared purpose: to report that America’s epidemic of gun violence persists and the toll on American lives has worsened since the horrific 2012 Sandy Hook murders, to lament the lack of action by federal government, and to remind everyone that gun violence can happen anywhere, and to urge everyone to keep rallying, that change is still possible. Public officials also took the occasion to remind that in New York State, while there has been significant progress at the state level here, it is not enough. The ease of access to guns across state lines remains a massive problem.

The conversation inside the brightly lit gazebo often veered back to Sandy Hook, when 26 people, including 20 children between six and seven years old, and six adult staff members, were murdered, and the spike of gun-related violence in virtually every life arena since: “Too many to count, to many to discuss, too many to name,” said Chappaqua Sheryl Manasse, speaking on behalf of Temple Beth El of Northern Westchester and of Moms Demand Action for Gun Sense in America, after she read an excruciating list of specific sites and the murder count at each-about 100 Americans a day.  “What do they all have in common? Access to guns. Access makes a difference. We need to be clear, consistent and active.”

During the early evening event, officials also warmly acknowledged attendee Erin Fuller Brian, a survivor of the Las Vegas shooting, and Kelly Marx of Pleasantville, who was commended for having organized last year’s 9,000 person strong rally against gun violence which took place in White Plains.

Westchester County Executive George Latimer opened the forum pointing out that despite naysayers, an individual “who doesn’t have access to a gun in the first place can’t create as much havoc and mayhem. Rational people understand that,” he said, adding that town and regional governments do have some authority to make a difference. “I banned the gun show on the second day of my job,” Latimer stated to applause. But yet, the danger remains. “It’s a short hop to another state. You can hop to another state like Virginia, and in a few hours, have a trunk full of weaponry legally purchased. Anybody warped can get their hands on something that does carnage to someone else… In the meantime, we meet to remind ourselves that we are not alone.”

State Assemblyman David Buchwald reminded that yesterday’s gathering was taking place the day after the 75th anniversary of D-Day. He said he hoped to see a day in which “commemorations like these are to think about it as something that happened in the past, and to get to a point when gun violence is few and far between.”  He said “we can take some pride that in New York State has not been a source of many of these tragedies.” Buchwald pointed out that his first legislative vote as a State Assemblyman was for a measure he co-sponsored, the SAFE Act, passed in the wake of the Newtown school shooting. The SAFE Act has been described as the strongest gun safety legislation in the country. “Even with that law,” he said last night, “we have to do more.”*

New Castle Town Supervisor Robert Greenstein recalled Sandy Hook too and “the 20 helpless beautiful children gunned down.”  He asked that everyone gathered  “close their eyes and take ten seconds to think about Sandy Hook,”… and pointed out that for the parents of Sandy Hook, the pain never ends. “We need our eyes wide open to see the travesty happening all around us in churches, colleges, high schools, newsrooms, synagogues, music festivals, restaurants, and banks.  Since Sandy Hook, nothing has changed at the federal level… Americans, he noted, are 25 times more likely to be killed by by guns than in other high income countries.”

Two Greeley students and siblings, Sasha Litwin and Brandon Litwin, also spoke, Sasha in memory of Alex Schachter, who at age 14 was a Parkland victim, “an innocent young boy tragically killed at the expense of our soft gun laws,” she said. “I’m enraged that 100 Americans are killed with guns every day. I fear as a 16-year-old that my school will be affected by gun violence. We must push our legislators to make concrete changes in our gun laws… this  constant cycle of pain, fear and suffering has to end… I wear Alex’s name on my wrist to keep Alex’s name alive.” Brandon followed, stating that we must “not be afraid o make change, shy away or run.  Our current gun laws should be run over and trampled… 40,000 people deceased in 2018; that’s the highest number in the last five decades… this is info that can not be put aside. Wear your orange with pride.”

The final speaker was Reverend Martha Jacobson of Chappaqua’s First Congregational Church who said she bristled at the suggestion by someone who told her that gun violence was God’s fault. “We ourselves make that choice; we are not puppets. Thoughts and prayers are not enough; God does not do prayers, we do prayers.  God does not stand up against injustice. God requires that we stand up to injustice. No matter what you call God, or who you call God or even if you don’t believe in God, we as human beings are required to stand up… to exercise our responsibility to love our neighbors as ourselves. It is incumbent upon us to stand with those who are actively working to make a difference.” Rev. Jacobson also led those attending in singing Amazing Grace, after which she pointedly added:  “And may our lawmakers in Washington finally come to see.” 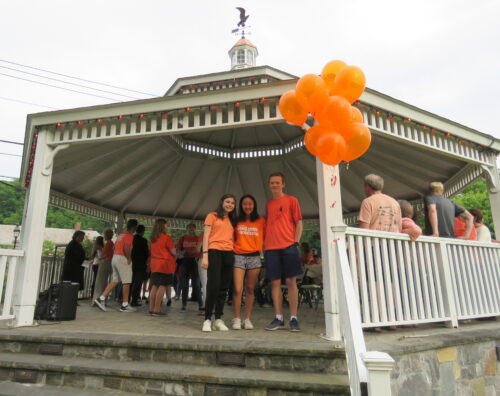 *Both Latimer and Buchwald said a wide variety of legislation pertaining to gun violence prevention has been either passed or is being heard in Albany. Buchwald has helped pass common sense gun measures that would ban bump stocks (A.9958), keep guns out of the hands of domestic abusers and clearly identified dangerous individuals (A.5025, (A.8976-B and (A.9978) and establish longer waiting periods to ensure thorough background checks (A.2406). Buchwald is also a co-sponsor of legislation (A.563-A) to expand statewide Westchester County’s successful safe firearm storage law.
“The Assembly has taken meaningful action to address many of the causes of gun violence in our communities,” Buchwald stated in an earlier release. “We must keep guns out of the hands of dangerous individuals and those convicted of domestic violence crimes.”

“Barely 150 days into 2019, there have already been 150 mass shootings, most recently in Virginia Beach. Today is National Gun Violence Awareness Day, and while we’ve made some progress, we have a long way to go. In any given year, more than 120,000 Americans are shot and 17,000 children are injured or killed. Thirty-four people in America are murdered in acts of gun violence every single day. We are in the middle of a public health crisis, and Congress has a responsibility to act. That is why House Democrats passed H.R. 8, the Bipartisan Background Checks Act of 2019. This bill would expand background checks universally to make our communities stronger and safer. Now the Senate must pass this important, commonsense gun safety legislation. I will continue fighting for sensible gun violence prevention legislation, on National Gun Violence Awareness Day and every day, to keep our children and families safe.”