For generations, my family has called Briarcliff Manor our home. It’s six square miles–Briarcliff’s, not our house’s–are nestled between the Hudson and the Pocantico, earning Briarcliff the historic title “a Village between Two Rivers.”

In 1902, my great grandfather on my mother’s side*, Walter Law, helped incorporate the Village. In exchange, residents named a park for him and put in a swimming pool, some tennis courts, and a Pavilion. Papa Wally famously concocted the original recipe for the grilled hamburger served at Squire’s restaurant*, repeatedly named the best burger by a competing glossy magazine and, to provide locals a dining alternative, oversaw* the conversion of the original Briarcliff Firehouse to the Patio Restaurant. The original fire bell still sits atop the building.

Ironically, two well-known Briarcliff landmarks–Club Fit and the Edith Macy’s Conference Center and Girl Scout Emporium–are not located in Briarcliff at all. (The first is in the Town of Ossining, and the latter in Mount Pleasant, or maybe Ossining–who can tell?) No one seems to know where the village actually starts or ends, or how you get here, partly because the Metro North station is called Scarborough instead of Briarcliff. For bragging rights, though, Briarcliff offers valet service for nearly unlimited train station parking and, on Friday evenings, fancily clad volunteers welcome home commuters with cocktails, mini crab cakes, and cheese straws.* 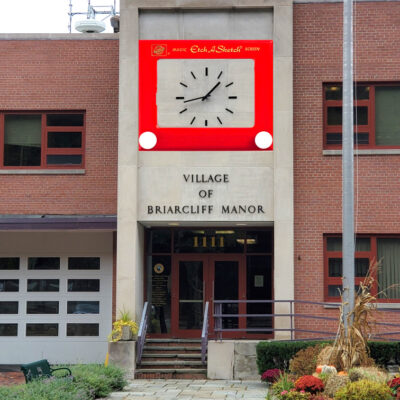 Speaking of volunteers, the Village runs on the benevolence of its residents. The impressive Briarcliff Manor Fire Department and Ambulance Department are both supported by generous residents who give their time and energy to keeping us safe. Elected government and appointed committees, the School Board, the Sustainability folks, and most of the coaches and referees of more than 172* sports programs are all local moms, dads, or near-adult children. Rotary International was first launched in Briarcliff,* and now holds weekly meetings at our Village Hall, a building that was the original headquarters for Ohio Art Company, the company that first sold the Etch A Sketch.*

Two major golf courses, Sleepy Hollow Country Club and a second one named for Melania Trump, provide members with exclusive access to facilities for golf, tennis, fine dining and the chance to hobnob with page one celebrities. Annual dues are waived for local seniors.* Call the clubs directly for details.

In keeping with Westchester tradition, the public schools are, of course, among the best in the country, according to both US News and World Report and most of the parents of all the school-aged children who live here.

Perhaps the Village’s best kept secrets are our miles of wooden trails and parklands, with a scenic picnic site abutting the Hudson River, and trails winding through Pocantico, and the Hudson reservoir. Hikers can choose the shortish Kate Kennard Trail, or follow the Old Croton Aqueduct Trail, or wander the 70-acre Pocantico Park, the Village’s largest park abutting the Pocantico River. And, of course, the Westchester County Bike Trail runs through Briarcliff, with easy access behind the Village Library, which also provides complimentary refreshments and spa facilities for tired cyclists.* 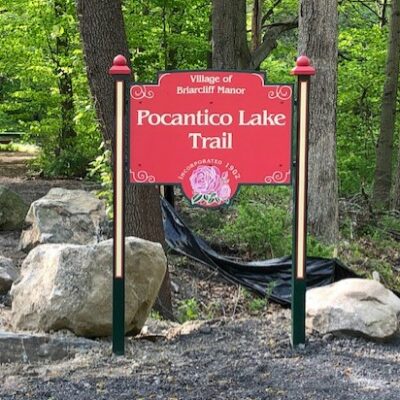 Despite all these amenities, Briarcliff seems designed to deter visitors. Sure, we have plenty of nail salons and a Japanese restaurant that sells awesome French macaron (no asterisk), but the roads are purposefully windy and romantically lit, and we encourage deer and wildlife to dart out in front of speeding cars. As with many Westchester communities, drivers here know that the double yellow lines are more of a suggestion than a rule.*

Come visit us! We are open around the clock, and locals are eager to make new friends, or welcome weary travelers from far away places like Pleasantville, Chappaqua, or even Mount Kisco. Risk the trip down Pleasantville Road construction. You’ll be happy you did.

*Peter Chatzky is not actually the Official Historian of Briarcliff Manor, although he did somehow twice manage to hold elected positions on the Briarcliff Manor Board of Trustees, once as Mayor and once as Deputy Mayor. Some of his facts may be slightly exaggerated, and we have marked them with an asterisk.