a leisurely ride or challenging trails, there are a number of bike paths around Armonk or Chappaqua that make for a fun outdoor weekend activity. There seems to be something for everyone along the bike trails winding through the vast woods in the area.

For Paul Toth, the North County Trailway is perfect for his son, George, to learn to ride his new bike. The trail way is 22 miles long with paved and mostly flat, shaded paths. George felt it was a little tiring, but the views are good plus he can show off his new ride to friends.

A little to the north

Kim and Brian Kelly have stopped on the Putnam Railroad Bridge.

The old truss bridge is a continuation of the North County Trailway. When the weather is clear, a visitor can see the Croton Reservoir shimmering below and rolling green hills off in the distance.

From where they live in Somers, Kim and Brian said the ease of access to views like this is the big draw for them for biking in Westchester.

“It’s just really nice to go out your driveway and get onto a trail within five minutes,” Kim explained. By all accounts, the North County Trailway is the best destination for those needing exercise and some time outdoors. The path winds through northeastern Westchester, past farms and small towns, through tunnels and thick woods, all the way up to the Putnam County border.

But despite how much sweat the rider works up, pulling off at Trailside Café in Yorktown will be worth it. Catering to North County Trailway riders, the shop offers a variety of refreshing juices, smoothies and light eating options to help fuel riders.

There are multiple points to start on the trail way but a short hill from Chappaqua’s Gedney Park along route 133 is an easy entry point to begin.

Head the other way on the South County Trailway for a different but still enjoyable day of cycling.

Covering 14 miles of southern Westchester, this trail still provides the scenery for a day of outdoors, but there are more options for other excursions as well. Ending at Van Cortland Park in the Bronx, the South County Trailway has a number of restaurants nearby to pull off to for lunch. Stop in Tarrytown and head to Neperan Avenue for a choice of local favorites including Lefteris Gyro, the Taco Project or Eatery.

To find the beginning of South County Trailway, head to Pleasantville and hop on at the intersection of Route 117 and 9A. 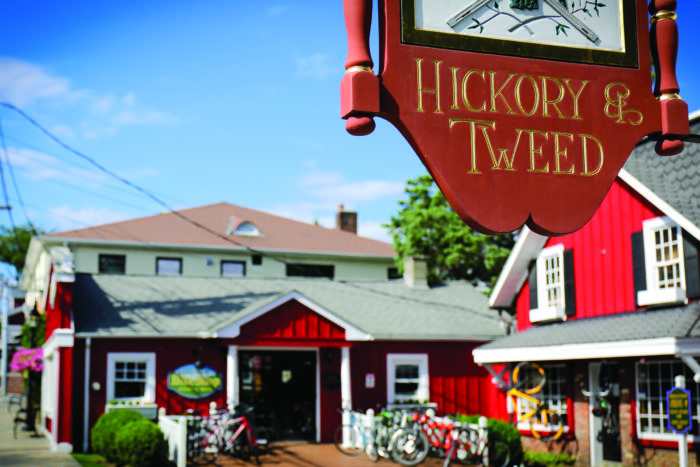 Those looking for a challenge should consider the mountain biking trails at Graham Hills Park.

The trails here are a five-mile network of narrow single-bike paths that test a rider with drop-offs, jumps and sharp inclines. Trails at Graham Hills Park begin on steep banks, uneven from roots and fallen trees and natural impediments.

To be clear, these trails are not for beginners. According to Dylan Hyman and Shawn McDonald, two bike mechanics at Hickory & Tweed, a ski and cycling shop on Armonk’s Main Street that’s been open since 1961, the trails at Graham Hills are geared for the experienced.

Both frequent mountain bikers themselves, Hymann and McDonald described the trails as “rocky and rooty,” “technical riding” that is comparable in difficulty to the black diamond rating reserved for the most challenging ski slopes.

“It’s probably good to have some mountain bike experience,” Hyman said of Graham Hills Park which is located off the Saw Mill River Parkway.

Twenty-five miles away in Peekskill is a bike trail that opened last year and has views that promise to be worth the drive.

The South Waterfront Park and Trailway includes a 1-mile paved and level trail system running along the Hudson River. From Riverfront Green to Charles Point, this trail is more about enjoying the scenic view of the river rather than getting a good workout.

There is parking near Riverfront Green Park on Hudson Avenue.