She readily admits to a ribbon addiction and says she’s literally covered in glitter from the beginning of November through the middle of January. So it seemed natural for Armonk resident Jennifer Amicucci to launch lifestyle website Gumdrop Lane, gumdroplane.com, this past October, fulfilling her desire to make it easy for people to create beauty in their lives.

The product of a strict Dominican family, Amicucci speaks thoughtfully about the powerful influence her family, particularly her grandmother and primary caretaker, Tirsa, had on her. “When I think of her, I think of lights surrounding her like La Virgen de La Altagracia,” she says, referring to the Spanish version of the Virgin Mary.  “She was so humble, so genuine, so extraordinarily talented. She was always helping others.

Watching her grandmother sew dresses for entire wedding parties, prepare large dinners from scratch and making her Barbie doll clothes from fabric scraps had a definite impact on the young Amicucci. She fondly remembers her mother creating elaborate décor for birthday parties and bridal showers and being part of the lively preparations for those big events in the Dominican culture.

After a move from Washington Heights to Pleasantville at age 14, Amicucci earned a BS and law degree from Pace University and worked as a medical malpractice attorney. The combination of career, caring for her three young children–Dario, now 9, Matteo, 8 and Christina, 6–and family illness prompted her to take stock and a step back.

Her husband, Dario, and friends encouraged her to focus on what she truly loved doing, so she considered buying a property in town to host children’s parties, which she had done before. She realized with a website she could manage her work schedule more easily while raising her children.

Gumdrop Lane is “a reflection of all that I have been through and all that I have learned and everyone that I have learned from,” says Amicucci. The tag line, “a sweeter life with a little sazon,” is a nod to her roots, reflecting her desire to add a little spice to people’s lives.  Since friends always ask for her party planning expertise, topics range from recipes to décor and DIY & crafts and beauty tips (she’s a former makeup artist).

Her Roman Catholic faith and belief in positive thinking has seen her through difficult family losses and illnesses, including her own post-partum depression after having Christina. “When you project sweetness and love and light, that’s what you will be surrounded by. I’ve evolved in that full circle and now it is my time to be able to share all of these things.”

Without much fanfare, Gumdrop Lane saw 1,700 visitors in its first week according to Amicucci. She’s focused on the long term, planning a line of craft products within five years. She defrays the cost of the site by creating store windows in town and holiday decorations in homes.Amicucci hopes Gumdrop Lane will inspire people to tackle a DIY project or make a delicious dinner. “You know, just making life a little bit easier for people. Finding ways for other people to be able to enjoy a beautiful place setting or a great kids party. They can do this themselves and feel the same fulfillment that I feel. It’s actually more of a high I think!” she says, laughing.

Freelance writer Liz Susman Karp lives in Briarcliff Manor with her husband and two teenage sons. She could use some inspiration to tackle a DIY project. 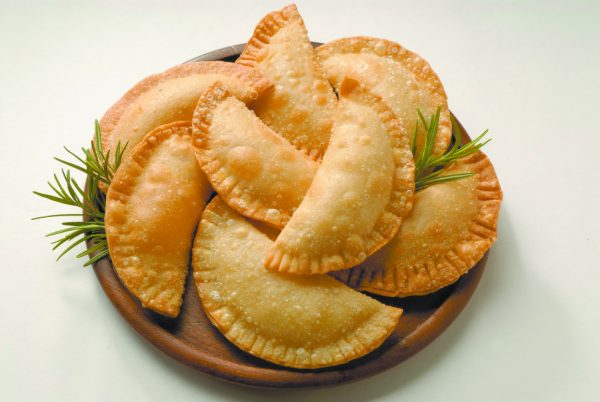 Heat the olive oil in a skillet. Season the beef with the packet of Sazon. Add the recaito to the oil and cook for a moment or two. Once the recaito and olive oil are hot, add the beef and brown until almost cooked. Add the tomato sauce and a pinch of dried oregano. Once the meat is cooked, turn off the flame and stir in the chopped eggs and olives.

Take one pastry disc and roll it out onto a cutting board to expand it slightly. Cut the disc in half.

Place one half of the disc and place roughly two tablespoons of beef in the center. Fold the dough over the filling. Using a fork, press down along the edges to seal the meat inside of the pastry dough. Repeat with other half, and then do the same with the rest of the pastry discs. Preheat oven to 350 degrees.

Grease a baking sheet with non stick spray, and arrange the empanadas on it. Using a pastry brush, lightly glaze the tops of the empanadas with the beaten egg. Bake for approximately ten minutes, or until the dough is golden. Remove from oven and allow to cool slightly before serving. Yield: 20 appetizer size empanadas!