Chappaqua and Millwood’s Volunteer Fire Departments, joined by many of New Castle’s First Responders, turned up in full dress uniform today to participate in a parade and to attend a Memorial Service to honor the life and service of Doug Hunter, the longest serving member of Westchester County’s District 1 Fire Department.

Hunter, a lifelong Chappaqua resident, devoted 70 years at the Chappaqua Fire Department serving the community at different junctures as Fire Chief, Fire Commissioner and as a life-long member. Hunter passed away at age 92 in February. A Memorial Service took place following the ceremony at The Church of St. Mary the Virgin. According to Chappaqua Fire Chief Russell Maitland, a reception at the firehouse was planned for after the service “as Doug wanted a party for his final farewell.”

Shortly before the procession, which lit up King Street and Greeley Avenue, Chappaqua Fire Commissioner Brian Murphy relayed: “Doug would have given the shirt off his back for anyone. He was the nicest person.” In a 2012 cover story by Ronni Diamondstein for Inside Chappaqua Magazine about the Chappaqua Fire Department, Hunter had described his strong camaraderie with his fellow firefighters. “We’re like a family. They help you out when you need help.” 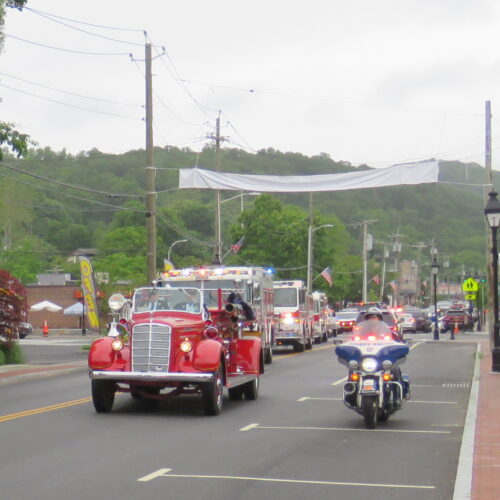