In his final days, as John Crabtree related, Richard “Dick” Clarke Crabtree had offered his son some straightforward instruction on the writing of his eulogy. “He told me to skip the bad stuff and just tell everyone I loved them.” And that’s just what John did. Love was the theme, and yes, it was also very much in the air yesterday at St. Patrick’s Church in Bedford.

There, several generations of Crabtrees, extended family, and hundreds of friends and neighbors gathered to fondly remember the generous love and legacy of Dick Crabtree, the founder of Crabtree’s Kittle House. Recalled were his multiple roles as loving husband, father, grandfather and great grandfather, decorated military leader, restaurateur, benefactor to multiple public service organizations, and more. (See below for a full bio, as provided by the Crabtrees.)

The traditional service included readings by many Crabtree family members. It also led with Msgr. George Thompson’s observation at the outset that it’s not money or even fame that defines the success of a person’s life. It’s love. And that the overflowing room was ample proof of the great love Dick Crabtree shared in every arena of his life.

In a pre-eulogy, Bud Heithaus spoke of his undying admiration for his military colleague, old friend, and offered a salute: “A job well done, General.” In John’s eulogy (which his best friend read on his behalf), John immediately noted that a few pages could not possibly tell the story of such a larger than life man. But he was wrong. Anyone attending could not leave without a keen sense of the compassion, wit and full life Dick Crabtree led.

John encouraged everyone “to keep the Dick Crabtree stories and legends flowing long after the service.” And to that end, the Crabtrees graciously invited everyone in the packed sanctuary to a delicious luncheon at the Kittle House, following the service and burial in Valhalla. The luncheon itself was festive with many indeed exchanging stories. If Dick Crabtree were watching, he’d have agreed that it was all “good stuff.” 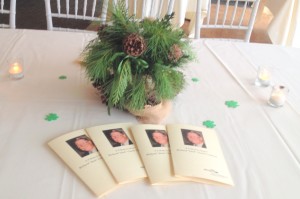 A final note. Dick Crabtree’s daughter, Clare Crabtree, told me that what she remembers most about her dad was “just watching him be wonderful.” I’d like to think, at that moment, that Dick Crabtree might have been watching Clare and everyone he loved be wonderful too. Rest in peace.

A bio of Richard “Dick” Clarke Crabtree as told by the Crabtree Family:

The Passing of a True Legend

Richard (Dick) Clarke Crabtree died peacefully on December 12 at Calvary Hospital in the Bronx with his family by his side. Dick was born in New Rochelle NY and was raised there by his parents Joseph and Irene. He attended Iona Prep where he excelled in sports, especially track, setting multiple records including in the 440 yard and 220 yard dash which stood for many decades. He attended both Notre Dame and Georgetown Universities where he studied business, and in 1952 he married Marjorie (Mimi) Hannon, a model, his childhood sweetheart, and dedicated wife until his death.

Dick served in the U.S. Coast Guard from 1953 to 1954 before entering the family automobile business, Crabtree Motors, where he took charge of the used car division and introduced the concept of ‘certified pre-owned vehicles.’ Dick was hired by Ford Motor Company as Northeast Manager of Edsel Car Dealership Sales, and despite the short term success of the project, was proud that each of the dealerships that he established survived the Edsel debacle to become thriving businesses. Dick worked as a bank executive at both Citibank and Marine Midland Bank, but eventually realized his true calling was to utilize his prolific people skills in the restaurant business.

He opened his first restaurant, Crabtree’s Plaza Inn in Crestwood, NY in 1974 to great critical acclaim, and then in 1981 he purchased a popular landmark in Chappaqua NY, the Kittle House, and completely restored the building and the business as the preeminent Restaurant and Inn in Westchester County. Amongst his numerous community positions, Dick served as a Commissioner of the Westchester County Police Board, 1978-1986, as Chairman of the Business School Advisory Board at Westchester Community College, as Trustee of the New Castle Historical Society, as president of Chappaqua Rotary, as a Director of Westchester/Putnam Girl Scouts of America, as president of the Boys and Girls Club, Myrtle Beach, and as Prior to the Sovereign Military Order of the Knights Templar. Dick also served in the NY Guard from 1992 until he retired in 1999 as a Brigadier General.

In 1984 Dick received the Westchester County Distinguished Service Award. Dick will be greatly missed by the multitudes whose lives he touched. No matter how many hats he wore, and uniforms he donned, Dick never lost his energy for life and compassion for the people around him, and wherever he walked the world was at least a little bit brighter. He will be forever remembered as a man ‘larger than life’ with a charm, wit, humor, and compassion that were truly remarkable. He is predeceased by his brother Robert and sister Joan Mackin. He is survived by his wife Mimi, seven children, eighteen grandchildren, one great grandson, and many loving nieces and nephews.

The family will receive friends and family at Cassidy Flynn Funeral Home in Mt. Kisco NY Thursday 7-9 P.M., and Friday 2-4 P.M. and 7-9 P.M. A funeral service will take place at St. Patrick’s Church in Bedford on Saturday at 9:45 a.m.

In lieu of flowers please make donations to the Boys and Girls Club of Northern Westchester, the Salvation Army, and Graymoor Spiritual Life Center.