Chappaqua, NY, May 29—A little rain couldn’t possibly dampen the spirits of the residents of Chappaqua and neighboring towns in their insatiable desire to pay tribute to those who serve our country on this Memorial Day.

I rode into town an hour before the scheduled 11 a.m. “tip off” to check with law enforcement and they confirmed that the PARADE WAS ON! Yippee!

By 10:30 am, Fran and I were headed toward the center of the village to secure our bird’s eye view location near the bottom of King Street, the Saratoga Race Course extra-large red & white umbrella in tow.

Leslie had already staked claim to a curbside seat despite the misty rain, protected by what appeared to be a Yankee giveaway umbrella. Dave had stopped for his morning Starbucks and a scone.

The buzz had already began to build, but no where near the crescendo it would reach less than an hour from now.

The youngins’ were gleefully skipping around between rain drops, adults gabbing between sips of Starbucks, pooches wistfully watching the proceedings with their moms and pops. The kiddies were shielded by their mini-umbrellas and/or rain slickers, but didn’t mind getting wet either.

Many were clad in an assortment of red, white and blue colored-clothing to celebrate the occasion – America’s colors – including this reporter who broke out his brand new red Puma baseball cap, like-colored bright red sneakers, red shirt, and blue pants.

Umbrellas with the order of the day for those seated and standing along the curb on both sides of King Street; hundreds had assembled to say thank you to the war veterans, those who paid the ultimate price. It was Memorial Day, and our annual tribute in this tony Westchester town was near. Dave nervously took a selfie to occupy time as the big moment neared.

The noise level reached a fever pitch as the two law enforcement officers on motorcycles sped down the hill. And away we go!

Their ensembles carrying the American and State flags, Chappaqua Memorial Day Parade organizer and Grand Marshall Jim McCauley led esteemed Chappaqua residents former President Bill Clinton and almost-President Hilary Clinton, who were joined by Governor Andrew Cuomo, and the parade was off to a rousing start. The distinguished Mr. McCauley just happens to be the father of one of my top-notch former NYU students Mike McCauley, who was on hand with his two sons. But we failed to connect because of the sizeable crowd, and they were also dodging rain drops. Next time for sure.

Then came the Chappaqua Library representatives carrying their banner, and Fran and Leslie roared with approval (they spend more time at the Library than they do at home).

The bagpipes blared, and led the way for the Vietnam war jeep. We missed Michael Greene who was a regular in this parade, until he and bride Lori moved to Aiken (I ain’t fakin’) South Carolina. The Green Monster was with us in spirit, and maybe one year soon he will come back to march.

Revolutionary soldiers resplendent in authentic outfits including three-pointed hats took us back in time, and then startled the masses with a very loud 21-gun salute; the canines by the way didn’t particularly care for the noisy gunfire. Perhaps that should be eliminated from the agenda next time. 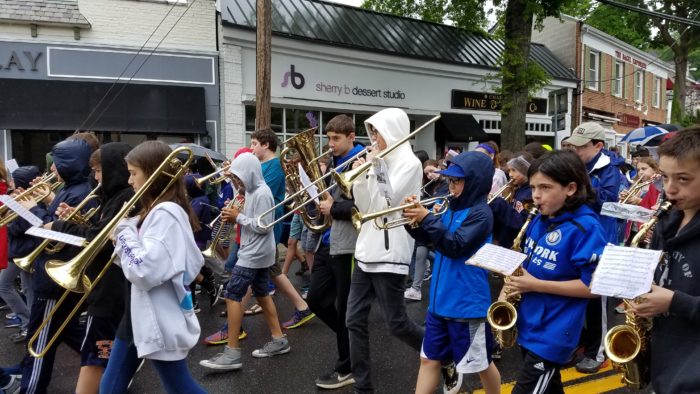 My two favorite participating marching groups annually are the Girl Scouts and the horn-playing, drum-banging band members, and they did not disappoint. The little misses celebrating the 80th year of “Where Girls Grow Strong Since 1937″) frolicked and waved to the crowd as they enjoyed their moment in the sun, er, rain. Then came the future scholarship musicians playing the full array of wind instruments from horns and trumpets to trombones and euphoniums to tubas, flutes, recorders, oboes, clarinets, saxophones and bassoons. (Did I leave any out? Sorry, if I did.)

All of these youngsters made one feel great about the future of this country. Plus, they belied the myth that one can’t walk and chew gum at the same time as they deftly performed on the instruments while negotiating the curves of King Street.

Chappaqua native Rich Rose, relocated in Boynton Beach, Florida, would marvel at the horn-players, as he was one himself decades ago, marching near his family’s dry cleaning business.

Who let the dogs out? Their moms and pops did, and the pooches, get a bark out from this reporter as they help to make Memorial Day one to remember.

By name Oliver was on hand; Thor was in attendance and was particularly risky; Maxwell was a proud participant, as many others whose names had slipped through the mind’s crevices on this chilly morning in Chappaqua.

But it was warm because of the reason why were all there. To say thank you to the service men and women who protect this country every day.

Public relations executive and blogger John Cirillo is a native of Brooklyn, New York, but his adopted home for nearly three decades is Chappaqua, where he resides with his wife Fran. A former public relations vice president for the New York Knicks and Madison Square Garden, Mr. Cirillo has operated the sports and culinary public relations firm Cirillo World for the past 20 years.  He is also an adjunct professor at Fordham University and New York University.