As of February 10th, one patient brought in from the Metro North crash remained in critical condition, according to a Westchester Medical Center spokesperson, Andy Laguardia.

Three more, of the original 12 patients brought in, were in fair condition yesterday.

The prognosis for anyone in fair condition are “favorable,” according to an interview with Westchester Medical Center’s Medical Director of WMC’s Emergency Department, Ivan Miller, M.D. Dr. Miller offered summaries of the American Hospital Association standards WMC follows, per this reporter’s inquiry, to say that the vital signs in a patient deemed in fair condition are considered stable and normal. “The patient is awake and alert; all indicators point to a favorable diagnosis.” A “good condition” is when a patient is ready or near ready for discharge–and all vital signs are “excellent.” 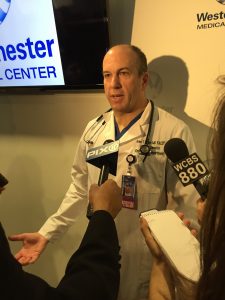 In contrast, in a patient listed in critical condition, Dr. Miller said, vital signs are considered unstable. “The patient is possibly unconscious and the condition is threatening to life or limb or to an organ.” A patient still in “serious” condition, he said, can have abnormal vital signs, but are typically still conscious. “Indicators are more favorable but it is all a matter of degree too.”

At the outset, the WMC team prepared for the worst, as they do for every disaster or patient arrival, he said. On the night of the crash, for example, the hospital related that a team of 100 were standing ready. “This is what we do,” said Dr. Miller. “When patients roll through the doors, we assume the worst and mobilize to stabilize as fast as possible,” he said. “Stabilizing,” he explained, “may be as simple as pulling a broken bone into proper alignment while also preventing damage to the soft tissue around the bone with a cast or a splint.”

If there is excessive bleeding, or signs of a large amount of blood lost, the team may need to resuscitate with an IV or blood transfusion. Pain and pain management is another key factor in determining a patient’s condition. “If the patient is considered in severe pain, he or she is not considered stable either.”

A host of specialized surgeons stand ready to intervene. “A severe blow to the head with bleeding inside the skull” requires a highly trained neurosurgeon in the area of trauma medicine, for example.

Dr. Miller declined to speak of any specifics of the nature of the injuries to any patient admitted to WMC from the Metro North crash itself. Generally speaking, he did explain that in trauma situations, more life threatening injuries are avoided when, as one example, lacerations do not hit a critical area. “A laceration to the arm, for example, may not be life threatening, while one to the neck where a large vein could possibly be ruptured are far more likely to be.” He emphasized that as a transport center from other hospitals without the same staffing and resources available to WMC–a regional trauma center–the hospital was well equipped to handle the Metro North and worse disasters, and have.