Eighteen years after the historic merger that created the North Shore-LIJ Health System, its Board of Trustees has unanimously approved a name change for New York State’s largest private employer and health care provider–Northwell Health.

“Being highly visible and clearly understood within and beyond the New York metropolitan area requires strong brand recognition,” said Michael J. Dowling, the 21-hospital network’s president and chief executive officer. “The Northwell Health name is a reflection of our past and a beacon of our future. It’s unique, simple and approachable, and better defines who we are and where we are going.”

The new Northwell Health name will be the centerpiece of a broad rebranding and marketing campaign that will launch in 2016, beginning a multi-year process to build recognition of the new name and distinguish the organization in a cluttered health care market. As a first step, the health system will begin introducing the new brand to its more than 61,000 employees, 10,000+ affiliated physicians and other internal audiences, including more than 13,000 nurses. 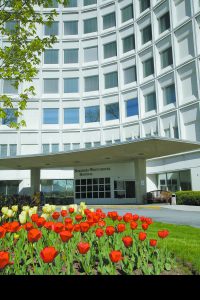 “While we have considered many different ideas over the years, our Board of Trustees selected a new name that signals a clear vision for the future of health: Northwell Health,” said board chair Mark L. Claster. “All those associated with this organization clearly are proud of our heritage and deeply grateful for the extraordinary support we receive from the communities we serve. Yet, our trustees recognized the need for a more consumer-friendly name that did not confine us geographically and reflects our emergence as a regional health care provider with a coverage area that extends beyond Long Island.”

With the continuing shift in the nation’s health care delivery system and the growing emphasis on health and wellness promotion and disease prevention, Mr. Dowling said, “We wanted a name that underscores our focus on keeping people well and better managing their health, rather than only treating them when they are sick or injured. The future of health care is about guiding and engaging consumers in a very different way.”

Earlier this year, the health system began working with branding consultants Monigle and Interbrand to develop a new company name and brand platform. In addition, the marketing communications firm J. Walter Thompson was brought in to develop a broad communications program. “Leveraging the new Northwell Health name, we will build strong recognition regionally and nationally, with the goal of elevating our reputation among both consumers and medical professionals,” said Ramon Soto, the health system’s chief marketing and communications officer. “We have a powerful story to tell and we believe our new name is the ideal platform to deliver that message.”

The health system’s current name stems from the 1997 merger of the North Shore Health System and Long Island Jewish Medical Center. The North Shore-Long Island Jewish Health System name has proven to be confusing to consumers, the news media, medical professionals and even the health system’s own employees. In addition, the health system’s name is not well recognized among consumers outside of Long Island, so the goal is to develop a marketing/communications plan for Northwell Health that will be driven by a compelling, powerful brand vision that resonates with the public.

Since the creation of the North Shore Health System in 1992 and its eventual 1997 merger with LIJ Medical Center that created the North Shore-LIJ Health System, the organization has evolved into a vast clinical, educational and research enterprise. It has grown over the years to become the largest private employer in New York State and the 14th-largest health system in the nation, with annual revenues of nearly $8 billion. Among the milestones over the past two decades include:
• the 1999 establishment of a biomedical research arm, now known as The Feinstein Institute for Medical Research, which includes more than 1,500 scientists, investigators and other employees ;
• the 2010 expansion into Manhattan with the addition of Lenox Hill Hospital and the 2014 opening of Manhattan’s first freestanding emergency center, Lenox Health Greenwich Village;
• the 2010 founding of New York State’s first allopathic medical school in 40 years – the Hofstra North Shore-LIJ School of Medicine, which graduated its first class in May of this year and will be renamed the Hofstra Northwell School of Medicine;
• the 2013 creation of the health system’s own health insurance company, CareConnect;
• the 2014 addition of two Westchester County hospitals, Phelps Memorial Hospital Center in Sleepy Hollow and Northern Westchester Hospital in Mount Kisco;
• the August 2015 strategic affiliation with Maimonides Medical Center in Brooklyn,;
• the September 2015 addition of Peconic Bay Medical Center in Riverhead in eastern Long Island;
• the September 2015 launch of the School of Graduate Nursing and Physician Assistant Studies at Hofstra University;
• a major ambulatory expansion that now includes about 450 outpatient physician practices throughout the metropolitan area;
• the largest ambulance transport system on the East Coast and the New York area’s first hospital-based, helicopter emergency medical service; and
• strategic alliances with such internationally renowned institutions as the Cleveland Clinic, Cold Spring Harbor Laboratory and the Karolinska Institutet in Sweden.

Beyond its hospitals, the health system also offers a full continuum of care through a broad network of skilled nursing facilities, rehabilitation programs, home care, hospice services, urgent care, primary care and specialty services throughout the metropolitan area, as well as access to more than 2,100 clinical research trials that have enrolled over 15,000 participants.

“This has been an incredible journey over the past two decades,” said Mr. Dowling. “The name change and rebranding campaign represent a very exciting milestone that positions us for even greater success in the years to come.”

About North Shore-LIJ Health System
The nation’s 14th-largest health system, North Shore-LIJ delivers world-class clinical care throughout the New York metropolitan area, pioneering research at The Feinstein Institute for Medical Research, a visionary approach to medical education highlighted by the Hofstra North Shore-LIJ School of Medicine, and healthcare coverage to individuals, families and businesses through the CareConnect Insurance Co. Inc. North Shore-LIJ cares for people at every stage of life at 21 hospitals and about 450 outpatient physician practices throughout the region. North Shore-LIJ’s owned hospitals and long-term care facilities house more than 6,600 beds, employ more than 13,300 nurses and have affiliations with about 10,300 physicians. With a workforce of more than 61,000, North Shore-LIJ is the largest private employer in New York State. For more information, go to www.northshorelij.com