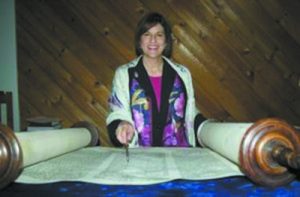 Rabbi Julie Hilton Danan succeeded Rabbi Sameth this summer as the new Rabbi for Pleasantville Community Synagogue, a trans-denominational synagogue known for Joyful Judaism serving 20 Westchester towns over the last 18 years. Rabbi Danan received rabbinic ordination after five years in the ALEPH Rabbinic Program. She was a student of Rabbi Zalman Schachter-Shalomi of blessed memory, the founder of the Jewish Renewal movement.

She has extensive experience in Jewish Education at all levels, as well as leadership in interfaith work and dialogue, including the Celebration of Abraham in Chico, bringing together hundreds of Muslims, Christians, and Jews to learn about one another’s faith and also to get to know one another as neighbors.

In addition to her rabbinical studies, Rabbi Danan earned a Ph.D. in Hebrew Studies, specializing in Rabbinic Literature and Culture, from the University of Texas at Austin. Rabbi Danan grew up in Texas, lived for several years in Israel and for 12 years in Northern California.

Based on her love of nature and the outdoors, she recently started a creative website: Wellsprings of Wisdom, www.wellspringsofwisdom.com, designed as a virtual retreat center built around Jewish symbols from nature.

Rabbi Danan is also the author of The Jewish Parents’ Almanac, reflecting her experience as the mother of five children.

Rabbi Danan is married to Avraham Danan, a Moroccan-Israeli who loves and teaches Piyut (traditional Moroccan Jewish liturgical song). They are delighted to be closer to most of their five grown children and two young grandsons on the East Coast and Midwest.