The number of drivers caught using electronic devices is frightening when you consider that the National Highway Traffic Safety Administration has reported that texting and driving is more dangerous than drunk driving. I can’t imagine the public response if we were reporting the arrest of 12 drunk drivers during the morning commute.

New Castle Chief of Police Charles Ferry stated “Our goal is to see texting while driving as socially unacceptable as DWI. We want to be able to report that our officers are no longer observing distracted drivers. Until then NCPD’s zero-tolerance enforcement will continue to ticket drivers who choose to use hand held electronic devices while driving.

Violator’s face a fine and 5 points on their drivers license. Probationary and junior drivers convicted of a cell phone use or texting violation will have their license suspended for 60 days. Fines and suspensions increase for subsequent convictions. 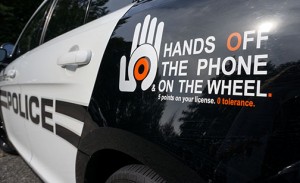