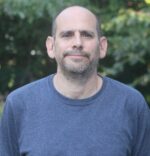 Grace Bennett is founder, publisher, and editor-in-chief of The Inside Press, now in its 18th year.