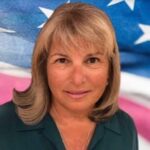 Another first-time candidate for office, Maureen McArdle Schulman is a 61-year-old retired firefighter and Yorktown resident.

She joined the New York Fire Department in 1982, when women were first entering the department. Out of 10,000 firefighters, less than 50 were women.

“You could imagine what that could have been like,” says McArdle Schulman, who served for 21 years in the department. “And I just worked really hard to gain people’s respect.”

“I actually got sick to my stomach that a woman can have an abortion up until her due date, and that really upset me,” says McArdle Schulman, who says she would make unborn children a federally protected group. “I am very pro-life, which might be a problem for some people.”

McArdle Schulman says she agrees with most of President Trump’s policies, pointing to the strong pre-COVID economy, though she adds that she tries not to pay attention to his tweets. She supports the effort to build a wall along the U.S.-Mexican border, but would also consider a path towards legalization for some immigrants who entered the country illegally.

“I feel bad for these kids who came here as children and don’t know any other country,” she explains. She highlights the New Way Forward Act, which would remove some drug crimes as deportable offenses, as one initiative that she strongly opposes. “You have to go through a background check. Have you gotten in trouble? Then you’re gone.”

McArdle Schulman says she supports Trump’s 2018 tax reform, though she would like to move towards a flat tax.

“A tax code that encourages home ownership is important,” she adds.

And while she favors cutting waste, she would not make significant cuts to Social Security, Medicare or Medicaid.

To lower healthcare costs, McArdle Schulman would allow people to shop for insurance across state lines.

The former owner of a small boutique dancewear shop, McArdle Schulman stresses that the economy must be restarted following the COVID-19 shutdown.

“It is killing small businesses,” she says. “We should get the economy going as soon as possible. If there are certain people who need to be protected, let them self-isolate.”

McArdle Schulman says she did not get involved in politics until after she retired. She stressed her honesty – “I am not going to promise things that I can’t deliver,” she says – and her willingness to work with a broad range of constituencies.

“Governor Cuomo is saying that there is no place in New York State for conservatives,” she adds. “I’ve been a New York State resident my entire life. Don’t tell me I don’t belong here.”

McArdle Schulman has been endorsed by the Westchester Republican Committee.

For more information on her platform, visit www.maureen4congress.com.