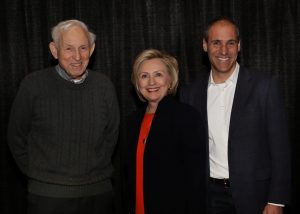 Steve and Ken Schainman, longtime Chappaqua residents (with Ken being a Greeley grad), had the opportunity to meet Hillary Clinton, the keynote speaker at an annual March conference of Camp Directors called the Tri-State Conference, held in Atlantic City. Secretary Clinton talked about camp being “the essential building blocks for young people over so many years,” and of her own participation, growing up, attending “only” day camps and in the Girl Scouts. But then she also laughingly recalled Chelsea’s stated wish, at the ripe old age of five, to go to sleepaway camp.

She told Chelsea she was too young and that she’d have to wait until she was eight. When she turned eight, Chelsea reminded her mom and also expressed her desire to learn German too, “being daddy’s girl and that he had studied German in college,” and off Chelsea went for a sleepaway camp experience.

The Tri-State Conference is the largest gathering of camp professionals, and about 3,000 attendees had gathered. “People travel nationally and now internationally to attend,” Camp Mohawk board member Barbara Schainman related to The Inside Press. “Our family has been actively involved in the American Camp Association for decades.” In fact, Steve and Barbara Schainman are the proud recipients of the conference’s highest recognition of “Legends in Camping.” — Grace Bennett