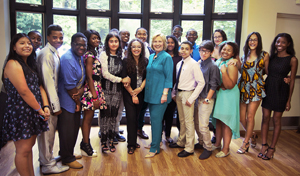 Like any teenager anxious about culinary choices in a new environment, Jejomar Ysit was taking no chances. “I packed an ample supply of Twizzlers and Doritos …just in case,” the Dewitt Clinton High School student (in an Einstein Honors program) quipped to a delighted gathering of host families, alumni, board members, and friends of the Chappaqua Summer Scholarship Program. His remarks were also directed to a beaming town resident in the front row: Secretary Hillary Rodham Clinton, a second Clinton to graciously address and meet with the kids on their momentous event. In 2005, her husband Bill Clinton was keynote speaker for graduation from CCSP, now in its 46th year.

Ysit said he grew both accustomed to delicious food along with “the sound of crickets and birds” replacing urban ones amidst all the “green sights and green hills.” 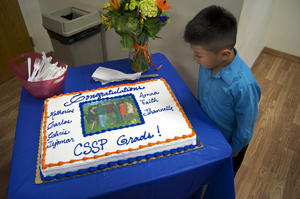 Jhannelle Robinson, a student at the Collegiate Institute of Math and Science, said she regarded the CSSP as a “home away from home.” She proudly read a poem she had prepared.

“Life,” she read, “was less like a circle than like a spiral looping around but still moving forward.”

Carlos Salas, a Bronx High School of Science student, captured everyone’s heart as he proceeded to explain how he became an adept swimmer after first arriving in Chappaqua as a non swimmer (he now does cannonballs in the deep end!).  Clinton, in her remarks, and in a nod to Carlos, later offered a metaphor in his overcoming such a key challenge. She likened swimming as a perfect metaphor for “moving forward.”

The students’ attachment to the program, the host families, the teachers, the staff, and, most of all the kids to each other, was palpable too.  Said Faith Matthew, a student at DeWitt Clinton High School and in the Macy Honors Program there: “I feel like crying now that it’s come to an end.” Added Katherine Puntiel, a student at the High School of Fashion Industries: “All of you are what make CSSP so significant. I will always carry each one of you inside me.” 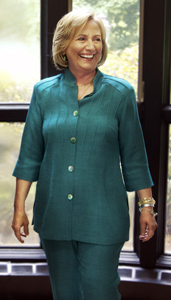 Collegiate Institute of Math and Science student Amna Aslam’s talk was sweetly self deprecating and love filled.  “The CSSP people have a knack for picking weirdos like me,” she said, with a wink. “The empathy and caring (of CSSP, et al) is so adorable.”
The program brochure was especially beautiful this year, with stunning full page portraits of each of the graduates opposite which was a statement from each one, including graduating student Christopher Carter, also from the Collegiate Institute of Math and Science.  “This program makes staying away from home a dream, with strangers that we call “Host Families,” stated Carter.
The early evening (a delicious reception followed) at the New Castle Community Center also included tributes to teachers and staff—and later, some half dozen alumni rose to briefly state “what they are doing today.”

The pulse of the pride in their accomplishments beat stronger than any urban to suburban distinctions.

Then, in an address marked with humor, spontaneity and a clear goal to mentor, Clinton took many of the kids’ own words to heart.  Almost immediately, she jumped on the first speaker’s tribute to our wildlife noting her appreciation too, ahem, for all the mice, raccoons, deer—and sometimes a hawk or an eagle. “You just come to expect and get used to it.” She praised CSSP for its “extraordinary level of understanding, commitment and wisdom.” She offered that she was here to experience a little of what her husband did nine years ago. “I’ll be able to go home and tell him how impressed I am too.” 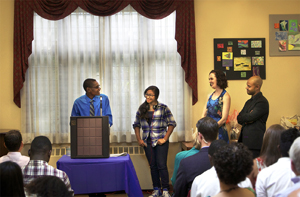 CSSP, Clinton noted, “breaks down artificial barriers that exist and prevent us from getting to know each other.”  One Bronx resident who broke through such barriers, she offered to cheers, sits on the Supreme Court–Sonya Sotomayor!” “She is a woman who made up her mind that she would be the best she could be.”

Clinton commended the student’s host families—and their own. “They (the host families) took a chance, believed in you and your potential,” she said. “You have families who came from Antigua, Jamaica, Pakistan and the Philippines. They have found a home here and now you have another home here in Chappaqua.”

Rely on all their lessons, she told the teens, and “pass it forward” to kids back in their own communities “so they can turn out to be just as sassy as you all are here.”  She urged the kids to “keep going out of your comfort zone. Envision where you want to be and bolster those skills that will serve you well.” She returned to the swimming metaphor to note, if you keep moving, something big will happen.
She reminded the kids to embrace whatever makes each of them unique. “The world doesn’t need a carbon copy of someone else; we need you, the uniqueness of YOU.” 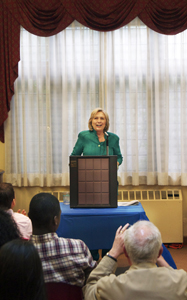 “Obviously, you can’t just jump into the deep end; everybody needs a starting point, but don’t be afraid to keep trying,” she said, “and don’t worry about getting knocked down either. The difference between those who keep going and those who don’t is those who just get back up.”  She amplified that message sharing some personal history. Clinton described her mother as having a “miserable childhood, and that with her sister (Clinton’s aunt) at ages 5 and 7, they were sent to live with paternal grandparents who she described as mean.
“When I was a little girl, I didn’t know any of this. I just knew she took care of me. When I learned about her life and I asked her how she came to be the great person she is, she said, ‘All along my life there was always someone who would show great kindness to me.’” The key, she said, is also to show kindness with a positive intention so as not to embarrass the receiving party. For example, one of her mom’s teachers was aware that she often didn’t have enough money to buy lunch food. She make a point of bringing extra food for her student, and so as not to embarrass her, would say, “Dorothy, I brought too much food today. Would you like some?”

From there, Clinton’s message was clear:  “Remember how important kindness is, how significant it can be, and that if someone shows you a little love, support and kindness, it can make all the difference. Look for opportunities to pass on kindness building on what your families have done for you.”

For more information about CSSP, becoming a host family or donor, visit their site: www.chappaquasummerscholarship.org

Grace Bennett is Publisher and Editor of Inside Chappaqua and Inside Armonk Magazines. Ari Bennett, Greeley ’14, will be entering Union College in the fall with a passion for math and the digital arts. 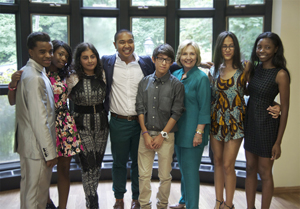 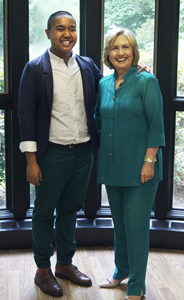 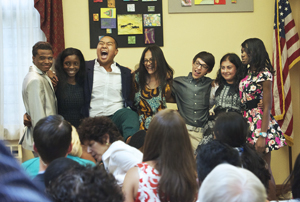