Children and adults alike may recall the lyric to the familiar song sung by Fred Rogers at the top of his PBS television show, but on April 11, it was Chappaqua — and not Mister Rogers’ Neighborhood — that people were headed for “a beautiful day in the neighborhood.” And what a beautiful day it was, in many more ways than one. The gorgeous weather not only allowed the event to fully live up to its name, but resulted in a fun, energetic afternoon, with town life more vibrant than ever before. At the helm of it all was Dawn Greenberg, executive director of Chappaqua-Millwood Chamber of Commerce, who spearheaded the event with the support of Chamber President Dawn Dankner-Rosen. 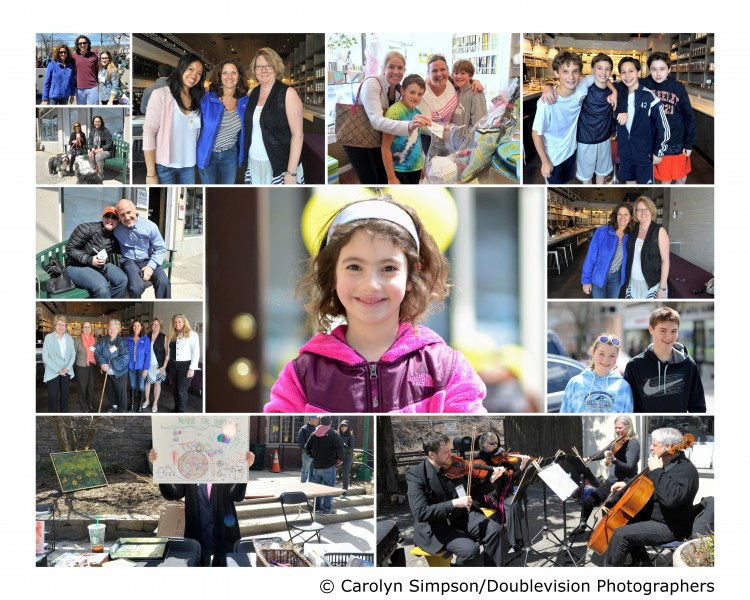 The event, which was built upon the idea of creating town awareness in Chappaqua citizens, was originally conceived “as something we could do for special education and special needs kids,” Greenberg explained, “as a way to help them navigate through town and learn about their neighbors.” But then, they thought, why stop there? Why not open it up to the whole town?

In simplest terms, it was a “getting-to-know-you” event, and Greenberg felt the necessity of such an event was one from which the town could benefit. “I feel like sometimes Chappaqua is missing a community neighborhood feel. And that’s something that we [Chappaqua parents] all grew up with, and so I wanted to bring that back.”

She also saw the day as an opportunity to inject some historical awareness into town members as well. “We wanted to allow everyone the ability to recognize historic town landmarks,” and become informed with their resources, specifically the ones that may be lesser-known to residents. These include the Greeley House, Town Hall, and the Church of St. Mary the Virgin, which are all steeped in rich Chappaqua history. Sadly, Greenberg stated, “most people just come [to town] and hit Starbucks and Dunkin’ Donuts and don’t realize how many hidden treasures we have in this town.”

That reason alone is most likely why Greenberg was “absolutely thrilled” to have so many eager–and varied–participants in the event. Volunteers ranged from Town Supervisor Robert Greenstein and School Superintendent Dr. Lynn McKay; to business merchants like Eye Gallery, Sherry B., and ICD Contemporary Jewelry; to regular townsfolk, including Horace Greeley High School students. Dozens upon dozens of New Castle families visited town reveling under the generous sun and balmier temps. But the most amazing aspect of all these groups participating was that they all recognized the importance to increase awareness of the daily happenings in town.

Jackie McCarthy, co-chair of the Special Education Committee of the PTA, had approached the Chamber with the idea for the event. “She wanted the kids to feel a part of the community and to learn how to navigate things like making purchases, opening a bank account, or getting a library account,” relayed Greenberg.

“It’s a real learning experience, especially for the kids,” said Lauren Levin, a member of the Chamber, “to know who their town officials are, and town government, and see them up close and in person.” Furthermore, “it establishes a relationship between local store owners and customers,” such that people may remember each other when they see one another in social settings outside of that store–strengthening the community bond. “We are a small town, and it is important to put a name to the face.”

Julie Greco, designer of the North Greeley Avenue Pocket Park (one of the day’s locations open for a tour) was simply excited to see people out and about. “[Small businesses] need people to spend money in town,” she reiterated. “So, they can get to know their merchants and have a nice day on a beautiful day.”

In addition to the landmark tours and numerous discount sales and giveaways from the businesses in town, other municipal employees were set up at tables that adorned Senter Street, including the Chappaqua Garden Club, which gave visitors seed packets, and the Chappaqua Children’s Book Festival, which gave away free books.

Members of the Chappaqua Volunteer Fire Department were also involved — “We like to get children interested [in the department] early,” said firefighter Paula Kurth — and gave children the opportunity to sit in the front of the fire truck, and take away a complimentary plastic fire hat or rubber duck.

Rose Ellis of Chappaqua Farmers Market was another volunteer on hand, passing out samples of Greek yogurt with maple sugar and massaged kale with goat cheese, as a promotion for the market, which re-opens at the Chappaqua Train Station on May 16th.

The Risko Band also treated participants to a live performance later in the day. Employees from Le Jardin du Roi served up some barbeque favorites for lunch.

Greenberg stresses that the event would not have been possible without the support of so many volunteers, and wishes to extend extra special thanks to its main sponsor, WeeZee: The Science of Play, a five-year-old sensory gym and learning facility located in Chappaqua, headed by Louise Weadock. Inside Chappaqua Magazine was a second major sponsor. Camp Kiwi, meanwhile, offered the free ice cream cones at Hall of Scoops.

Of course, Greenberg’s appreciation and gratitude to everyone involved was wholeheartedly reciprocated. Julie Greco, of the aforementioned Pocket Park, specifically commended Greenberg for her work on planning the whole event: “She’s done an outstanding job; she’s just a dynamo and we thank her. And she’s done it with such a great spirit.”

When asked what she hoped the event would accomplish by the end of the day, Greenberg replied, “My goal is to make people in town feel uplifted and more connected with their community.” Based on the comments of all involved, it seems that her goal was indeed met. It was truly a beautiful day in our neighborhood.

Matt Smith is a longtime Chappaqua resident, who graduated from Skidmore College last Spring, with a degree in Theatre and a Minor in Creative Writing. He is a frequent contributor for the Inside Press, Inc.