Through the Lens of Claire Yaffa

On June 9, several hundred people attended the rededication of the Garden of Remembrance, hosted by the Holocaust and Human Rights Education Center, which  has offered sanctuary to thousands of people affected by the Holocaust since it was built more than 20 years ago. The ceremony, attended by Holocaust survivors, liberators and rescuers included a special flag presentation by the Jewish War Veterans color guard and a saying of the Kaddish, a Jewish prayer for the dead.  Westchester County Executive Robert P. Astorino gave the keynote address and mayors from White Plains, New Rochelle and Mamaroneck attended the ceremony.

Along the garden walls are the names of 26 places where Jewish people were killed by Nazi persecution.

BIO:   Claire Yaffa’s distinguished career began as a photojournalist known for social realism.  She focused on society’s problems of child abuse, the homeless, Holocaust survivors, children and rescuers ,  also working for The New York Times and Associated Press.  She has published seven books and her new exhibition at The New York Historical Society, “Children with AIDS: Spirit and Memory features 20  black and white portraits, taken from 1990-2002, honoring the remembrance of the children who have died and the one child who has just celebrated his 21st birthday.  The exhibition will remain until after Labor Day. 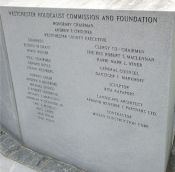 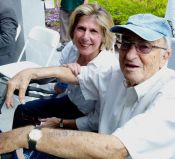 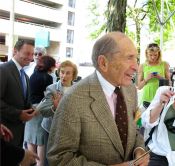