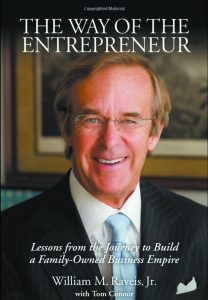 “I was having breakfast with a friend one winter day earlier this year at Jane’s, an outdoor café in Naples, Florida, a few blocks from my winter house in Port Royal. This enclave of 600 estates–ten and 20, 30, even 40,000-square-foot temples to capitalism at the edge of the Gulf of Mexico–is a tropical Newport, Rhode Island, and the only place of its kind on the continent. It also happens to be home to some of the wealthiest individuals and families on the planet. Many come from the world of finance and big business–investment bankers, retired corporate CEOS and CFOs, hedge fund guys–but as many are entrepreneurs, men and a few women who have built business empires (as I have) and made their fortunes in highly individual, innovative ways. They’ve all hit it out of the park.

Which is one of the main threads that run through this book: The way entrepreneurs determine their success by virtue of individualism and an unwavering belief in themselves and their passions.

The subject appears to be timely. More than ever, America is a land of limitless entrepreneurial opportunity. At the same time, it remains the immigrant’s dream, a country in which you can do anything and be anyone you want. All you have to do–aside from working really, really hard–is embrace the immigrant-like ideals of belief in oneself and one’s vision and be embraced, in turn, by family and extended family and friends.

In the end, in fact, it is that community of believers and supporters who help make American entrepreneurs what they are, not only business schools or MBA programs or investors.

It also helps, by the way, to reside outside the corporate mindset. As you’ll see, the distinction between entrepreneurs and corporate executives matters. A lot.

I’ve been out to breakfast and lunch with other business people, some of whom never make eye contact with the servers, much less engage them in conversation. But like entrepreneurs in general, I seem perpetually interested in learning about other people (and, if I’m reading Malcolm Gladwell’s David and Goliath accurately, which admittedly may be iffy, the majority of entrepreneurs are like me in another respect: We tend to be dyslexic).

So I view encounters with a waiter or waitress as an opportunity to connect not just with another human but, more often than not, with a young person who has his or her own passion, vision and dream.

Our waiter at Jane’s that sparkling, sunshiny morning was a young man in his early-to mid-20s with Slavic features and a strong Eastern European accent. His name was Piotyr–Peter, for convenience in America, he told my breakfast companion and me–and had come from Moldavia three years earlier. After hearing from a Ukrainian friend about life in Naples, he had driven 1,000 miles from Maine with his girlfriend on the dream of one day opening a restaurant of his own, and he had stayed.

“Why leave?” Peter told us. “Is so beautiful!” Then–perhaps taking in our clothes, or the Bentley parked in front, or the fact that we were free to take a late breakfast in the middle of the workweek–he voiced a sentiment that either hasn’t been uttered, or I haven’t heard, in a very long time: “Thank you,” he said, “for building this country!” He was speaking to us but he might as well have been talking to the founders of the nation and the heroes of the American Revolution, who were entrepreneurs in the truest, fiercest sense of the word.

My entrepreneurial journey happens to have been mapped through real estate and a family-owned company, but it could just as easily have been in any industry and any entity. What counts is what you bring to a business–vision, passion, imagination, determination, sheer courage–not what it brings to you.

Bill Raveis’ The Way of the Entrepreneur is distributed by National Book Network (NBN) and available through Amazon, Barnes & Noble in-stores and online, and independent book stores nationally.

In 1974, Bill Raveis opened the first William Raveis Real Estate office in a room above a grocery store. Today, William Raveis Real Estate, Mortgage & Insurance is one of the top companies in the nation and a full service real estate, mortgage and insurance brokerage with over 3,600 sales associates and 114 offices throughout the Northeast, annual real estate sales of nearly $8.1 billion, 3,000 corporate relocation transferees a year and a total mortgage volume of $10 billion.