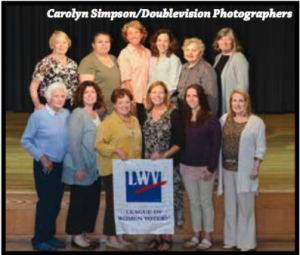 By Marianne A. Campolongo

On November 3, New Castle voters will choose their Town Supervisor, two town board members and other local officials and judges.

“Not all people live in a country where they have the right to vote. The right to vote in some parts of the world is exercised at great personal risk. It always helps me to keep that in mind when voting is really inconvenient, ” said Mary Kirsch, Voter Service Director of the League of Women Voters of New Castle.

According to a report by Nonprofit Vote, nationwide, in 2014, just under 37% of eligible voters turned out to vote, the lowest level of voter turnout seen in a midterm since World War II.” In New York State, that number was even lower. At 29%, New York ranked 49th in voter turnout, with only Texas and Indiana having lower participation.

The report notes that low turnout leads to more polarized politics. “At a local level, the act of voting grows from and helps foster healthier and more engaged communities. Voters are more likely to…contribute to their neighborhood’s ‘social capital’ and live in communities where neighbors are in contact with one another.” When local offices are at stake, as they are this year, each vote is more important, and should spur participation rather than discourage it.

You can learn more about the candidates at www.Vote411.org and by attending Candidates’ Night on Oct. 29, 7 p.m., at the Chappaqua Library.