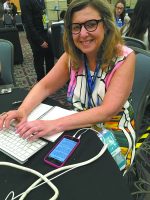 As the publisher of a hometown magazine for Hillary Clinton, and a life-long Democrat, I was proud to attend the Democratic National Convention as press. I was as excited as any friend, family or delegate visitor to Philly’s Wells Fargo Arena to witness first the all-star line-up of our nation’s Democrat Superstars throw their full weight squarely, and often, ever so eloquently into our hometown candidate’s corner. And then, of course, etched in my mind forever…witnessing Hillary Clinton make her way to the mic, waving to the crowds in every which direction, and fully embracing her historical nomination.

Midway through her speech, it was no surprise to me that Hillary extended her accomplishment from family to, well, everyone else: “Standing here as my mother’s daughter, and my daughter’s mother, I’m so happy this day has come. I’m happy for grandmothers and little girls and everyone in between. I’m happy for boys and men–because when any barrier falls in America, it clears the way for everyone. After all, when there are no ceilings, the sky’s the limit.”

I remember too: the abundance of heartfelt hugs–Hillary hugs. To me, they symbolize Hillary’s ubiquitous “Love Trumps Hate” campaign slogan…hugs for Bill, for Chelsea, for her running mate Tim Kaine, and on the night before, for and from President Obama. And countless other ones for those closest to her and seemingly always plenty to spare for her fans too. When hate gets thrown at her, Hillary Clinton doubles down on her capacity to tap into a bottomless reservoir of love–and hugs!

And daily, inside the Philadelphia Convention Center: dozens of public service organizations promoted their missions via buttons, literature and animated conversation; at a daily breakfast briefing, caucuses and roundtables, open primarily to press and delegates, speakers delved into issues near and dear to their hearts. The general public attended rallies or packed “PoliticalFest,” a fun, interactive festival related to American history and politics.

Hillary Clinton’s official nomination represents a huge historical milestone for Chappaqua too. I learned at one point that Hillary Clinton really appreciates the nights on the campaign trail when she can sleep in her own bed. So learning of a surprise celebration for her at the Kittle House on the very night following Roll Call in the arena was very touching; Chappaqua really is home, sweet home to Hillary.

I was also glad to head to Philly with my long-time friend and former classmate at Columbia’s ‘J-school,’ Susan Youngwood, a self-described ‘political junkie.’ We were both first time press covering a political convention for either party. We independently mapped our days, posting in social media, writing, taking pictures and editing. We stayed in Cherry Hill, New Jersey, about 15 miles away in the lovely home of Joan and Barry Swirsky, old friends of Susan’s, gracious, helpful and excited-for-us hosts.

Next, Susan reflects on her experience. From the outset, we agreed that we would focus much less on national-style coverage of the major speeches which our readers would turn to national media for. Instead, we set out to capture an eclectic array of stories that you might not see in other press, particularly anything that could qualify as having a local angle.

With that goal in mind, Susan captured such stories, and in particular the activities of two groups founded by long time Chappaqua residents who are collaborating more and more, too: Chappaqua Friends of Hill and Tim (CFOH) and Executive Women for Hillary, and those are the stories I chose to reprint from the net in part in our print edition to call your attention to them. The CFOH’s Hillapalooza barbeque party that took place shortly after the convention was a wonderful way to bring together many more residents to celebrate too. — Grace