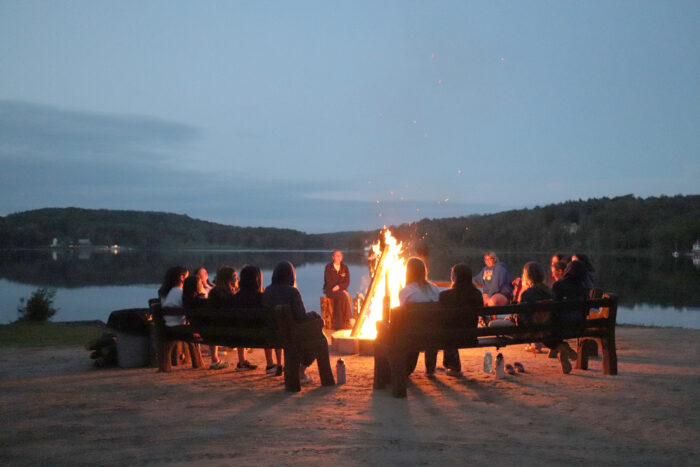 By ‘Camp kids,’ we all know the type. Those who bleed their camp colors and ride out the year so they can live in the summer. Those who year after year return as a camper, then as a color war captain, then as a counselor until their friends say, maybe it’s time to do something else.

Brad Lerman’s friends thought that he would get over his love for camp and put his childhood dream of owning one to bed. And maybe Lerman thought so too, at one point spending his summer working at camp while studying for his LSATs. But as much as he enjoyed working as a lawyer for 12 years in Manhattan, it wasn’t his passion or his purpose.

He had always been thinking of ways to reignite the “camp bug” he had inside of him and the perfect opportunity presented itself to do just that.

Goodbye litigation, hello new camper orientation! Lerman and his wife Dani, who grew up in Armonk and also had a great camp experience growing up, are the two new co-owners of Camp KenMont KenWood, the sleepaway camp for boys and girls ages 8-15 just an hour away from Armonk.

“It’s something I’ve been waiting for for a decade, and luckily, I have the world’s most amazing wife and the most supportive family,” Lerman said. “It’s a lot of good change for our family, [as we’re] starting to grow ours this year not only with my wife being pregnant but also growing our KenMont KenWood family.”

They, along with their dog Dudley and soon-to-be newborn baby girl will all be familiar faces at camp. Lerman is Co-Director with Hylton Wener, who will also be at camp with his wife/Program Director Amanda, their sons Dylan and James and their pup Gilley.

Lerman went from working 70-hour weeks as a lawyer to designating a few hours in his day to solely researching the best Wet Willie Water Slides. Let the record show that while having amazing facilities is something he prides the camp in having, it isn’t everything.

“Our facilities are phenomenal. We’re in Kent, CT (in close proximity to Armonk). We’re on the beautiful North Spectacle Lake,” Lerman said. To him, if anything, the amenities (and awesome water slides) are a bonus to the incredible camp culture and community.

For starters, the retention rate speaks for itself. The staff is filled with former campers who came back to watch their own kids grow up at camp as well, like Girls Head Counselor Marisa Rahn who is returning for her 25th summer. Administrative Director Michele Troche is also returning to camp after 20 plus years. So, what is it that keeps bringing them back?

Maybe it’s the fact that it’s a brother-sister camp, so siblings can get that individual camp experience while being able to see each other a few times a week. Or that the food options are never-ending from Chef Chad who is returning for his fifth summer, along with a new pastry chef and dietary needs chef. Or, that the counselors come from all over the world, providing campers with diversity.

Younger campers are given a more structured day-to-day schedule so that they are exposed to all the different activities and can try as many new things as possible. And if they are missing home, the office prints out emails sent from parents every morning and hands them out to the campers and phone calls are permitted as well. With that being said, Lerman wants to normalize missing home.

“Home missing is completely natural. I miss home sometimes, so we want to make sure that kids don’t feel stigmatized by it,” Lerman explained, “but also make sure that we address it and keep parents informed and make them realize that it’s just a temporary passing phase.”

If that doesn’t speak to the comfortable culture and community that the camp has built, what does?

Next year, KenMont KenWood will be celebrating their 100th summer. Whether you are looking to become a counselor or looking for a camp for your kid, this is the opportunity to be a part of a century of amazing experiences, memories, and traditions.

Like Lerman said, one day at camp is like one month anywhere else. That’s a whole lot of time to catch the camp bug…

Visit kenmontkenwood.com to learn more about the camp experience, testimonials, dates and more.