The majority of the town board voted last night to approve retail at Chappaqua Crossing, the former home of Reader’s Digest. Supervisor Rob Greenstein and board members Adam Brodsky, Jason Chapin, and Elise Mottel voted “aye” while Lisa Katz voted against the three resolutions on the table. 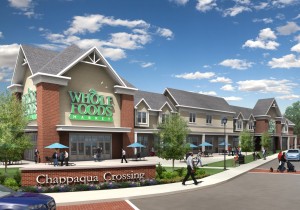 Though retail uses have been approved in the current “research and office business district”, there will still be opportunities for the public to voice their concerns and opinions in 2015. According to town attorney Nick Ward-Willis, there are a number of steps remaining in this process. For instance, the placement of retail within the campus has yet to be decided.

Each member of the board read prepared statements ahead of the vote. Katz, the sole “nay” voter, expressed her concern about the size of the project. Katz described weighing very carefully the pros and cons of the development for the town and questioned the sum of the benefits that have been praised by others. Not convinced that tax revenues from Summit Greenfield’s property will be substantial, she pointed out the potential decrease in taxes from homeowners and downtown businesses whose assessments she opined would likely go down. Per Katz, the concessions made by the developer do not assuage the additional traffic burden on the town as well as the change in its nature.

Greenstein called this process “the longest and most controversial application in the town’s history.” Describing the “idle, vacant” property and the town’s tax base being 91% residential and only 3% commercial, he expressed his belief that voting to approve retail is the “best possible decision for ALL residents.” Greenstein continued, “Kicking the can down the road is not an option.”

Chapin agreed with Greenstein as to the nature of the vote, calling it the most comprehensive and controversial matter in his seven years on the board. Describing how the town went “far beyond what is required by law” in having at least 20 public hearings, he applauded the town boards, attorneys, and staff who all played an important role, per Chapin. “Change causes fear and uncertainty,” said Chapin, acknowledging that some of his friends and neighbors would be disappointed in the decision.

Mottel expressed her belief in the importance of a commercial tax base and the intention of the board to “ensure the required mitigations are met.” She remains concerned that despite enhancing the tax base, some traffic issues remain unmitigated.

Brodsky described “wrestling the entire year” with this matter, trying to balance the interests of the entire community and realizing that “some are more directly affected than others.”

Greenstein listed concessions by Summit Greenfield, including contributing $1.5 million to the town for recreation and business hamlet improvements, $600k to improve the Horace Greeley High School entrance on Roaring Brook Road, four parcels which would help create a buffer for neighboring homes, the Wallace auditorium, a free jitney for travel between the crossing and the downtown, and covering the town’s consulting fees.

Greenstein summed up the majority decision of the board; “We put aside our differences and acted in the best interests of the town.”