Initially inspired by the strong encouragement of her first-grade nun, Patricia Jordan, a 12-year resident of the Town of New Castle, has been writing, both professionally and for pleasure, for over 60 years. “Finding Alvin” marries two of her long-time loves, writing and dogs. This story is also dedicated to the loving staff of Yorktown Animal Hospital. 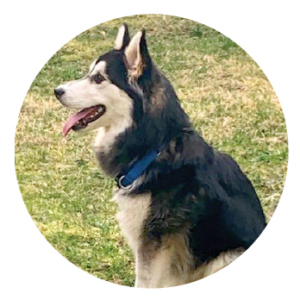 On April 6, 2021, six months after the loss of our 13-year-old husky Keira, I clicked on a site and saw Alvin, a smiling, young husky with three legs. He’d been shot in Georgia, medically treated there, rescued, and brought to a New Jersey rescue organization, where he was being fostered.

I closed my browser, left the room, and tried to focus on my resolution never again to adopt a dog. It had been a grief-filled six months, my husband and I were now in our 60s, and I didn’t feel capable of enduring such pain again.

But something drew me to the photo of this puppy, who, described on the site as a “gem,” seemingly refused to be cowed by his two-month-old ordeal. Could he bring joy back into a home that had seemed so dismal these past months? Was Keira somehow engineering this? Don’t be dramatic, I told myself, and closed my Mac.

We had rescued Keira in October of 2013, during yet another grief-filled period, as our rescued rottweiler had died suddenly. Keira, described as “depressed” by the rescue organization, had not only been abandoned by the only family she’d known in her seven years, but had been rejected as an adoptee because of her age. I felt we needed each other–and the rescue organization agreed. It was a wonderful seven years.

When we noticed a limp in the summer of 2020, we attributed it to a low-grade Lyme infection for which she was being treated. When she fell one day, we rushed her to the emergency room and learned the worst: it was non-operable bone cancer and our choice was euthanasia or amputation. We waivered, sobbed and ultimately followed the advice of Keira’s loving doctor: “Go see Keira. Her eyes will tell you if she wants to live.” We did and they did.

In the months that followed the amputation, we put as much of our lives on hold as possible, cheering Keira as she adapted to her new gait; sleeping with her in the living room since she could no longer traverse stairs; renting a beach house in a town she loved–and beginning the treatment regimen that we understood was designed not to cure, but to enhance her quality of life in the limited time we’d have.  As it turned out, it was, indeed, limited.

In early October, I heard a piercing yelp and found Keira on the floor. The cancer had spread, and it was time to say goodbye.  My husband and I lay on the floor at the emergency room with Keira, holding and kissing her for 30 minutes. it was clear that she was ready to say goodbye.

As I returned to my computer on April 6, 2021, I felt again the eerie notion that Keira was urging me to buck up and read about Alvin. The adoption requirements seemed onerous: a home 50 miles or less from the rescue organization’s headquarters; experience with a northern breed such as a husky; and a fenced yard.

No way, I thought. We did have two out of three, but the rescue organization was in a New Jersey city I’d never heard of. Nonetheless, I did a quick map search of the town. My iPhone GPS read, “50 miles, one hour and two minutes.” Not 51 miles, not 53 miles, but 50 miles! The distance requirement, check! Northern breed experience, check! Fenced in yard, check! And, certainly not a requirement, but we had experience with front-leg amputation in a northern breed! Could there be a more perfect family?

I sent the 12-page application, went to lunch with a friend, and waited for the call that came that very day. While the rescue people were trying to be circumspect, I sensed that they, too, felt this was meant to be. After various steps to verify our appropriateness, including a home inspection, the rescue organization–apparently agreeing that there could be no more perfect a family–decided to forgo additional steps.  Alvin was ours!

As a young amputee, Alvin has surprised us with his agility. He climbs–no, leaps–up the stairs two at a time, jumps into my SUV with no assistance, swims–and exudes joy. I often think of the encouragement that President Joe Biden brings to those in a state of grief, having himself grieved deeply. “One day,” he says, “you’ll remember that loved one, and a smile will come to your lips before a tear comes to your eye.”

I often smile these days, even after only one year, thinking of Keira. She had her way. Alvin is home.