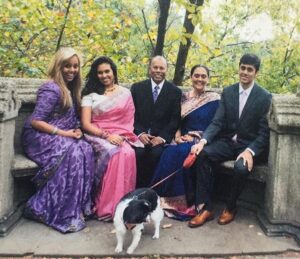 The Patel family has called Chappaqua Ridge home since 1982. The family consists of Rohit, an endodontist, Kalindi, a retired child psychologist and their children Amrita, a dentist who works with her father Rohit, Kavita, who holds a Masters in Public Health and Ved, a biomedical engineer with Topcon in New Jersey. The close-knit family originally moved to Chappaqua Ridge for its excellent school system, proximity to the city, local culture and the great outdoor spaces Chappaqua has to offer. Gedney Park, in particular is one of Amrita’s favorites, having grown up playing there with childhood friends.

Chappaqua Ridge was originally developed on land previously owned by the Haviland family, and has become an ideal neighborhood for families to raise children, enjoy close proximity to downtown and take advantage of everything Chappaqua has to offer. The neighborhood is big on holiday celebrations – neighbors put pumpkins out in front of their homes for Halloween so that trick-or-treaters know which houses to stop for candy, and many even coordinate decorations for other holidays throughout the year.

The Patels love Chappaqua Ridge because they have generations of family members in the area and everyone has continued to stay close. As Amrita says, “I’ve had friends I grew up with live here and then move away, and new families come and go, but the same warm atmosphere hasn’t changed since the community welcomed my parents here in the 80’s! I would love to stay in Chappaqua and especially in the Ridge. I want my children to grow up with that same warmth that I did.” This is truly a testament to the close, neighborly atmosphere Chappaqua Ridge offers to its residents.

As a Chappaqua native, Amrita has many favorite “hot spots” in town but one of her favorites is Lange’s, which according to her, “Makes the best egg and cheese breakfast sandwich around.” Certainly a ringing endorsement!

Christine Pasqueralle is a freelance writer, wife and mom of two. Based in Hawthorne, Christine enjoys yoga, the arts and exploring NYC and the surrounding areas.