The walk this Sunday, November 7, starting at 9 a.m. is co-sponsored by the Holocaust & Human Rights Education Center (HHREC) and the Holocaust Museum & Center for Tolerance and Education.  It is to remember and honor the victims, survivors and rescuers of the Kristallnacht pogroms and the Holocaust.*

“Just as we will be taking in the beauty of the Hudson River, we can also remember back to 1938 when synagogues and storefronts of Jews were broken into and burned down,” said Millie Jasper, executive director of the HHREC in White Plains. The Holocaust Museum recently opened at Rockland Community College. The HHREC is presenting additional Kristallnacht commemorative events; see below.

“Participants may walk some or all of the Gov. Mario Cuomo bridge, however far they wish,” said Jasper, in remembrance of the terrible events which transpired between November 9 and 10 in 1938 on Kristallnacht, oft referred to as ‘Night of Broken Glass’.

As a child of survivors, I plan to walk, too.  My dad, Jacob Breitstein (who passed away at 97 in 2019) survived Auschwitz and the Holocaust but his mother and four siblings were killed.

My father references Kristallnacht in the opening to his unpublished memoir when he comes upon a group of destitute deportees from Germany in his hometown in Lodz.

… “Last week I was a wealthy man in Germany, and this line I’m standing in is a soup kitchen! The Germans came into my store, told me to go outside, put me on a train, and here I am.” I couldn’t comprehend what happened. It must have been Kristallnacht.”

Kristallnacht is notorious for the solidifying of a nation’s descent into total madness and for the continuing downward spiral toward the massive destruction of the Holocaust. But it’s erroneous to think of Kristallnacht as some sole trigger of the Holocaust, explained Steve Goldberg and Julie Scallero, HHREC’s co-directors of education during a discussion about Kristallnacht.

“From Kristallnacht, yes, the Nazi agenda begins to accelerate, and less than a year later, we have World War II,” said Goldberg. “But November 9 was not an arbitrarily selected date, either. The Kaiser abdicates on November 9, 1918, as Germany loses World War I. On November 9, 1923, Hitler’s smaller Nazi party fails to overthrow the government in Munich and Hitler is sent to prison where he writes Mein Kampf, the rantings of a madman, and he is eventually released.”

“Kristallnacht was thus very calculated,” said Goldberg–revenge against Germany’s losses and Nazi failure. The breaking, burning, beating and murdering took place all over Germany and in Nazi-occupied territories in Austria and Czechoslovakia too.

The deportations in October 1938 “were a foreshadowing, with so many Jews being put on trains, and dropped callously at the Polish border, told to get out,” said Scallero.

One such victim of the deportations sent word to her son in Paris of their family’s urgent plight. Infuriated, Herschel Grynszpan, made his way to the Embassy in Paris, where he shot a German diplomat, Ernst vom Rath, who soon died. Soon after, Joseph Goebbels, propaganda minister for the Nazi regime, greenlighted the pogrom carried out by the Sturmanteilung (SA) aka the ‘Brown Shirts.’

To learn more about Kristallnacht, I also visited the HHREC’s well stocked library of Holocaust related literature and borrowed historian Martin Gilbert’s Kristallnacht: Prelude to Destruction (Harper), a compilation of devastating testimonies from dozens of survivors. From the book jacket summary: “In the early hours of November 10, 1938, Nazi storm troopers and Hitler Youth rampaged through Jewish neighborhoods across Germany, leaving behind them a horrifying trail of terror and destruction. More than a thousand synagogues and many thousands of Jewish shops were destroyed. Kristallnacht–the Night of Broken Glass–was a decisive stage in the systematic eradication of a people who traced their origins in Germany to Roman times and was a sinister forewarning of the Holocaust.”

From Gilbert’s intro, “In 24 hours of violence, 91 Jews were killed. Within those 24 hours, more than 30,000 Jewish men between the ages of 16 and 60–a quarter of all Jewish men in Germany–were arrested and sent to concentration camps. There they were tortured and tormented for several months. More than a 1000 died in these camps.”

And so, we remember.

To mark Kristallnacht, Armonk’s Congregation B’nai Yisrael community and 7th graders who are studying the Holocaust are having a conversation on Wednesday, November 10 via Zoom with Hannah Deutch, member of the HHREC Speakers Bureau. Hannah experienced Kristallnacht as a young child in Germany.

On November 14, the HHREC will present “Holocaust Memory and Racial Healing” via Zoom featuring Susan Neiman, director of the Einstein Forum and author of Learning from the Germans: Race and the Memory of Evil. Free and open to the public. To register and receive a link, write to sgoldberg@hhrecny.org

*For more information about Kristallnacht: Bridge Walk to Remember, please contact the HHREC, 914.696.0738 mjasper@hhrecny.org www.hhrecny.org, or the Holocaust Museum & Center for Tolerance and Education at 845.574.4099 www.holocauststudies.org. Registration to this walk, which begins on the Westchester side, is limited to 75 participants.

This story was first published this week in the EXAMINER NEWS. Special thanks to publisher Adam Stone and editor Martin Wilbur for including it. 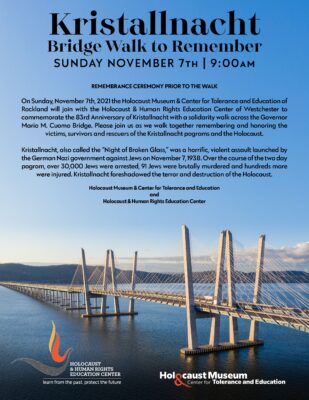