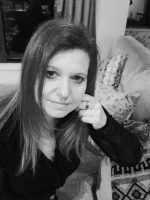 In the midst of closing editions and approaching the New York primary–and with Chappaqua being understandably a place of such keen interest–I was interviewed by two very inquisitive reporters; the opportunity allowed me to reflect a bit on why I support Hillary Clinton so much. The fact is: The presence of Secretary Hillary Clinton in Chappaqua, New York, in New Castle, has made publishing in her hometown both joy and challenge; at times, I take a deep breath to retain my courage in doing so. Not everyone is for Hillary here after all. But I only want to tell them this: Hillary Clinton has had a profound impact on my life and I want others to benefit from the magic that is Hillary too.

I was thrilled to first get a more intimate sense of her in 2006 in a gracious sit down interview at Lange’s Deli, and over the years have observed her style and manner at so many local events; they are of the kind any one of us would do well to emulate. And then there was that precious, extraordinary 10-day trip to Africa. I watched her engage in diplomacy and exhibit a warm, mutual respect with leaders facing many challenges. It was stunning to see a lone woman leader at any number of conference tables and inside palace suites seated with mostly men tackling global issues. Not in the middle. At the helm. In charge. The spotlight was naturally hers. So comfortable in her own skin. So confident.

I am hardly alone in my awe of this world leader! Hundreds of Hillary’s neighbors and most ardent area supporters (including myself!) recently attended a wonderfully successful fundraiser on her behalf in the Mount Kisco home of Tracy Stein and Marco Masotti. As a two-time Senator and Secretary of State residing in New York, Hillary Clinton was commanding a double digit lead over Bernie Sanders at press time, but the campaign was not taking anything for granted. We sat, or stood, inside a heated tent on the chilly morning of April 11, listening to Hillary Clinton share details of her platform; most notably, she seemed to place a particular emphasis on her commitment to gun violence prevention. Congresswoman Nita Lowey, who has spent a good portion of her political career fighting the gun lobby, was there too.