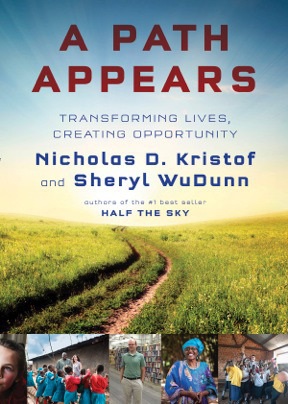 Nicholas Kristof and Sheryl WuDunn, Pulitzer Prize winners and authors of the #1 bestseller Half of the Sky will discuss their new book, A Path Appears: Transforming Lives, Creating Opportunities on Monday, October 27, 2014 at 7pm at Congregation B’nai Yisrael (CBY) of Armonk, New York. Tickets are $45 per person and include a signed copy of A Path Appears.

In their new book together, the husband-wife team focus on how each of us can play a role in making the world a better place and offers concrete advice on how we can give back responsibly and effectively.

“Nobody clarifies the social challenges of our time, or the moral imperative to help meet them, better than Nick Kristof and Sheryl WuDunn,” said former President Bill Clinton. “Their latest book, A Path Appears, offers an important reminder that just because we can’t do everything doesn’t mean we shouldn’t do something.”

“We are excited to host Sheryl WuDunn and Nicholas Kristof, whose work challenges all of us to consider our commitment to the broader community,” says Lisa Broomer, President of Congregation B’nai Yisrael.

In 1990, Kristof and WuDunn were the first husband-wife team to win a Pulitzer Prize for journalism for their coverage of China’s Tiananmen Square democracy movement. A columnist for The New York Times, Kristof is often called a “reporter’s reporter” for his activism and was the subject of the 2009 Sundance Film Festival documentary Reporter. He has lived on four continents, reported on six, and traveled to 140 countries, all 50 states, every Chinese province, and every main Japanese island in order to offer a compassionate glimpse into global health, poverty, and gender in the developing world. Kristof won a second Pulitzer in 2006 for his columns on the genocide in Darfur and has won innumerous awards including the Dayton Literacy Peace Prize and the Anne Frank Award.

The first Asian American to win a Pulitzer Prize, WuDunn is a business executive, entrepreneur, and best-selling author. She has special expertise in Asia entrepreneurship, global women’s issues, and philanthropy. As an investment banker, she currently helps growth companies, including those operating in the fields of new media technology, entertainment, social media, healthcare, and the emerging markets, particularly China.

Kristof and WuDunn also coauthored the bestselling books Thunder from the East: Portrait of a Rising Asia and China Wakes: The Struggle for the Soul of a Rising Power.

Founded in 1970, Congregation B’nai Yisrael of Armonk is a Reform congregation with nearly 400 family members.