Alexander Roberts, who first reported on the fact that Westchester’s wealthiest towns had lost as much as 60% of their 25-34 year olds since the 2000 census, will be presenting at a public meeting in New Castle. Sponsored by The Journal News, columnist David Wilson will host a discussion about the Chappaqua Station affordable housing development on Hunt’s Lane that has been stalled due to community opposition and required variances.

Roberts, who is the executive director of the nonprofit Community Housing Innovations, will talk about the historic opposition to affordable housing in Westchester, and how the lack of workforce housing inhibits economic growth in New Castle, contributing to higher taxes.

Wilson has been highly critical of the town, which originally chose the Chappaqua Station site and invited the developer to build on it, and then opposed the project after an election changed the town board.

Bill Spade, a prominent Chappaqua architect and member of Chappaqua for Responsible Affordable Housing, will argue at the event that the Chappaqua Station site is inappropriate for residential use and would stigmatize those who live there.

The HUD Monitor in the Westchester discrimination Consent Decree recently said the county was in violation of the court order because it failed to take legal steps to insure that Chappaqua Station is developed.

Residents are invited to attend the free event. 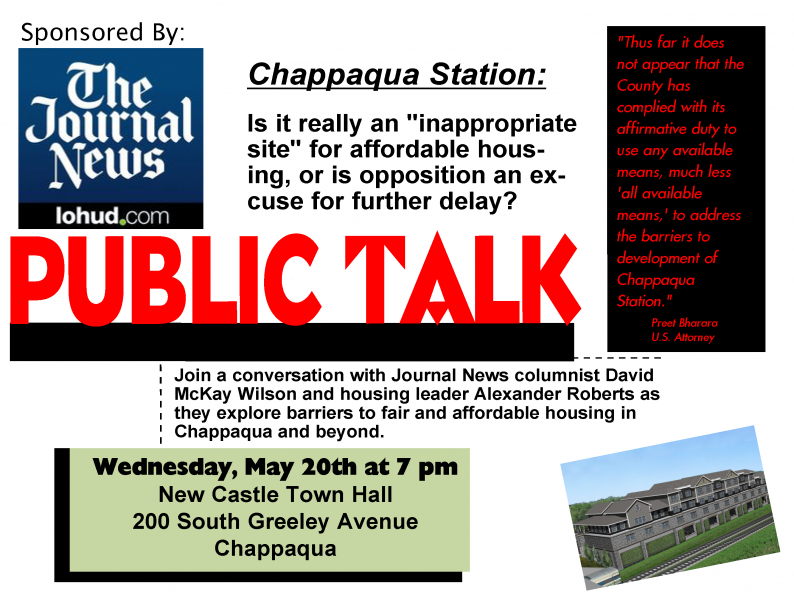