An extraordinary and little known story unfolds in the Katonah Museum of Art’s exhibition, Jasper Johns & John Lund: Masters in the Print Studio. This is the first museum exhibition to explore the working relationship of these two masters. Over the past 30 years Johns and Lund have forged a rare artistic collaboration: side-by-side. Master printer Lund has helped Johns, one of the most prolific and prominent printmakers of the 20th and 21st centuries, achieve precisely the desired effect he seeks for his prints, 47 of which are featured in the exhibition.

“We are thrilled and honored to have Jasper Johns in our museum, “ says Ellen Keiter, Director of Exhibitions who curated this show.  “We were attracted to this story of the relationship of Johns and Lund. It’s a new angle and new story that hasn’t been done.” This one-on-one relationship is uncommon in the print world.  Johns and Lund first worked together in 1973 at Universal Limited Art Editions (ULAE), the fine art print publisher, where Lund was a lithography printer.

A decade later Lund became integral to Johns’s printmaking process as the exclusive printer to work on the artist’s intaglio prints. In 1996 Johns established a private print studio at his home in Sharon, Connecticut and Lund and his family moved up to live on the property. “Jasper Johns and John Lund had an amazing relationship,” says Keiter. “The exhibit is rich with narrative and celebrates the contribution that Lund made to the print world.” The exhibition will show the printmaking process and offers a glimpse into Johns’s private print studio through a selection of recent photographs.

Keiter says they hope to attract a broad audience of all ages who are interested in prints in general and how they are made. “We have a great line-up of programs.” They include field trips to ULAE and the Museum of Modern Art and panel discussions with such noted experts as Bill Goldston of ULAE and Wendy Weitman, former curator of Museum of Modern Art. John Lund will join Keiter for a Curator’s Tour and there are many printmaking programs for children.

The exhibition Jasper Johns & John Lund: Masters in the Print Studio will be on view at the Katonah Museum of Art from March 23 through June 15, 2014. For more information on the exhibition and programs visit the museum website: www.katonahmuseum.org 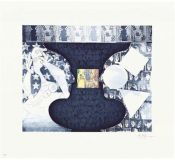