Marched proudly June 2 with my two kids and with members of the Holocaust and Human Rights Education Center and with so many other excited and enthusiastic Jewish day schools and special interest groups at the 65th Israeli Independence Day parade–who were invited to lead with Governor Andrew Cuomo.

Did break off from our group at the outset, flashed the new June issue of Inside Chappaqua to one Cuomo staffer and got a green light too to capture a few images together with a dozen or more local and national media jockeying for position under a hot sun. Thousands of onlookers took in his prominent presence along the parade route.  Notwithstanding a couple demonstrations along the way, the parade proceeded peacefully.

As for me, I was thrilled for the opportunity to spend time with my kids for a day marching in a parade that I grew up on. We dined after on Matzah ball soup and corned beef sandwiches at PJ Bernstein’s, a decent Jewish deli on the upper East Side.  Cabbed it to Grand Central for the 1:48 to Chappaqua–and then we all collapsed back home. 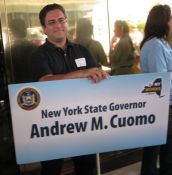 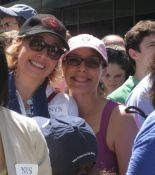