It was a remarkable and ultimately courageous and empowering gathering. Jewish students home on winter break, who might otherwise have spent the evening at home or out with friends, instead arrived by the dozens to the JCC of Mid-Westchester in Scarsdale on a weeknight earlier this month to partake in a forum created by a newly formed, Westchester based group, “Students and Parents Against Anti Semitism on Campus.” 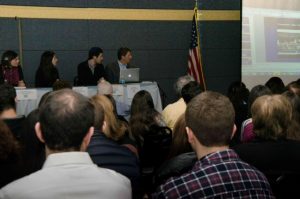 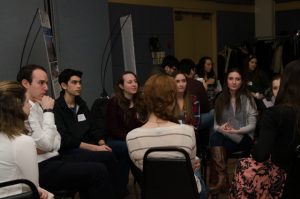 A panel of speakers pointed to a growing anti-Israel sentiment — and as a seeming recurring consequence, anti semitic incidences — taking place on college campuses across the U.S. “There is a problem on college campuses. It is systemic; it is not just in one place,” one speaker said.

A panel of five speakers included a representative from New York University (a young woman who led the panel described herself as a “lone ranger” sometimes in this battle), and four others from Stand with Us and the Jewish National Fund.

The anti-Israel mood on some campuses, the speakers said, appears to be the outcome of well organized groups whose members seek to actively influence student body perception of Israel—frequently referring to Israel as an apartheid state or by laying the blame squarely on Israel’s door for the war in Gaza this past summer. They drive home their messages via rallies or staged “die ins.”

All this might be fine in the free speech arena, however footage shared — via a short film: “The New Face of Anti-Semitism: Crossing the Line” — showed Jewish students being shouted down, or otherwise made to feel vulnerable in sharing a pro Israel stance. “There are regular comparisons of Israelis to Nazis; it is twisted, repulsive and becoming increasingly commonplace,” one of the speakers noted.

Following the individual talks, the speakers and the students broke into smaller group workshops, in which students shared their own experiences, everything from seeing a swastika painted on a Hillel wall to feeling intimidated in class by a professor holding pro Palestinian views. Parents were led into a separate room for a workshop as well.

Students were generally advised that these groups and their dismissive attitudes are ultimately small “with scripted messages and that the public as a whole does not support these messages.”

“Keep your composure,” the NYU student leader urged. “Take a step back. Arm yourself with the facts. The facts are on our side. Educate yourself about the issues. It’s also best to ignore some of the tactics, such as the die ins. Don’t give them the press they want.”

“Stand with Us is here for you,” said one of its representatives. “If you encounter anti-Israel activity on campus, reach out to us.”