On any given Monday, when the clock strikes 12 p.m., a select group of community members gathers at the Kittle House. Sure, that’s nothing unusual; the famed restaurant sees many patrons pass through their doors at that prime lunch hour, be they friends catching up, colleagues meeting to discuss business, or local merchants, seeking a respite from their busy day. But while this group is indeed dining, swapping stories, and enjoying each other’s company, there’s another inherent purpose behind their meeting: they’re addressing and discussing important local and global issues, as a means to come together and create positive, lasting change within our community.

This group is, of course, the Rotary Club of Chappaqua, and since 1983, they’ve upheld this noontime routine. At each of their weekly meetings, the club will typically host a guest speaker from a given organization, who will speak to that organization’s cause–one to which Rotarians could consider donating at the end of the year. Past organizations to which the Rotary Club has donated include, but are not limited to, the Horace Greeley Scholarship Fund, the Food Bank of Westchester, Shelter Box, Hope’s Door, and more. To pursue the goal of community service, emphasized by the Rotary motto “Service Above Self,” the club organizes several community events each year, the proceeds of which are donated to the above organizations.

These events include the annual Pancake Breakfast & Blood Drive, held in the Spring at The Church of St. Mary the Virgin; and Charter Night, held around February or March, wherein club members honor both a Rotarian and a community member, each of whom have fully demonstrated the “Service Above Self” motto through their commitment to volunteer work in the neighborhood. The Rotarian receives the Paul Harris award, named for the original founder of the Rotary Club International, while the community member is given, aptly, the Community Service Award. The club also holds an annual Holiday Concert, featuring the Greeley Madrigal Choir, at the Kittle House in early December.

But their biggest and most buzzed-about event is, without question, Community Day. This year’s event will be held on Saturday, Sept. 17th, 11 a.m. – 3:30 p.m. 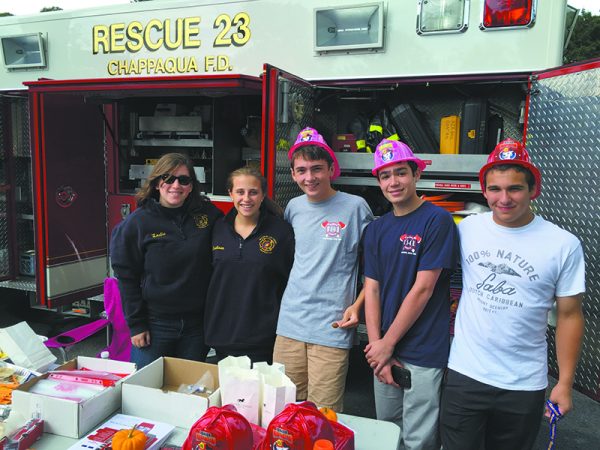 The festive fall bash, held each year at Chappaqua’s Metro-North Train Station, aims to strengthen the communal bond between friends and neighbors new and old; it’s a golden opportunity each year to familiarize residents with all our local merchants and community-based organizations.

“It’s a nice way to get to know the town,” says current Rotary President David Shields, adding the event was one of the first he attended upon moving to Chappaqua in the early ’80s. “Back then, it was in the parking lot of Bell [Middle School],” he continues. “[It’s] a nice tradition, and a great way to celebrate all the town has to offer.”

Over 70-80 booths will showcase a wide array of organizations, local merchants, and civic-minded groups, including everything from Chappaqua Girl Scouts, Boy Scouts, and the PTA to Chappaqua Garden Club and New Castle Recreation and Parks Department, to Greeley student clubs and the New Castle Historical Society, and much, much more.

Additionally, given that it’s an election year, “There’ll [also] be a lot of political booths,” notes Past President and current Rotary member Don Roane. “Perhaps more so than other years.” Indeed, the local Democrats, Republicans and the League of Women Voters will all have booths at the event. As they’ve done in years past, Roane adds, “We’ll also provide rides, bouncing castles and face painting for the kids…[And] a hot dog and soda stand for [lunch].” Rotary Past President John Ehrlich will return to run the Blood Drive in the Plaza. 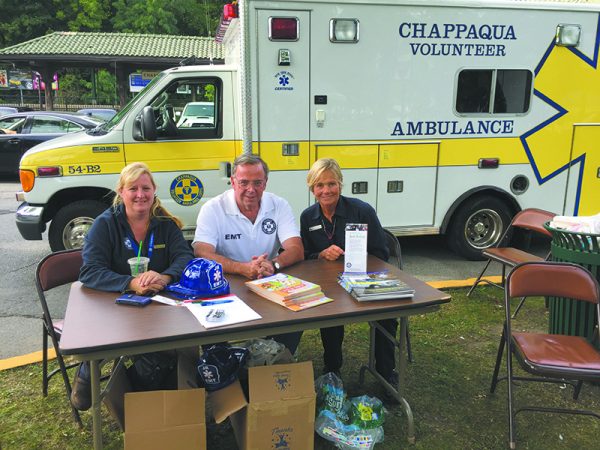 Shields, meanwhile, announces the Westchester County Clerk Community Outreach Service will return, “which consists of a van with a portable office where folks can get help applying for a passport.” Furthermore, this year’s program will include live performances from Chappaqua’s student musicians. Spearheaded by Dr. Michael Rudolph, now a Chappaqua orthodontist, but formerly a professional musician, the live music “[will] add another level to the event,” says Shields, with a smile.

“And [it will] give them [the musicians] some exposure as well, so that’ll be nice.” Students from Dance Emotions, the Chappaqua-based dance company, and Amadeus Conservatory of Music, will also be on hand to perform. And if all that weren’t enough, this year, Community Day will happen concurrently with both the Chappaqua Farmer’s Market and the Greeley Homecoming Celebration. So, there’ll certainly be no shortage of fun happening at the Train Station then! As for the club itself? They’ll continue to hold their weekly Kittle House meetings, promoting “leadership development, professional networking, local and international awareness, and above all, community service opportunities,” in keeping with Harris’ original mission.

The club is always looking to add to their roster…and you don’t necessarily need to join full-time to attend meetings. So stop in for a visit, and if you’re inclined, become a member!

Need further reason to join? The club itself is steeped in town history! As Shields explains, whereas “most people…are commuters or moved here as adults,” four current Rotary members (Harold Campbell, Peter Davidson, Erik Nicolaysen, and Sandy Bueti) “actually grew up in this town….going back to the ’30’s and ’40’s. They went to Bell when it was the high school,” he explains. “They have lifelong ties to [Chappaqua]…this really is their hometown.”

But regardless of any past or prior connections, it’s clear all Chappaqua Rotarians fully acknowledge and appreciate how “the town is very accommodating in helping [their events] progress” and ultimately, occur. On a larger scale, club members also recognize that in addition to the local Rotary work, “Rotary International [the main Rotary service organization, also] has a worldwide impact.”

No doubt these two elements have an effect on the community at large. “Even as a small organization, we do a lot of good,” comments Roane, upon reflection. And really… at the end of the day, isn’t that what the meaning of “community” is all about?

The 2016 Community Day will be held on September 17th from 11 a.m.-3:30 p.m. at the Chappaqua Metro-North Train Station. For more information, please visit the Chappaqua Rotary Club Facebook page.

Matt Smith is a regular contributor to the Inside Press and has attended many Community Day events while growing up in Chappaqua.