Take a look at the old Orthodox Friends’ Meeting House as you drive up the hill on King Street. 300 King Street, a landmarked building which many residents remember as the Village Nursery School, is now buzzing with the sweet sounds of hammers, saws, drills, and even a newly purchased jackhammer. Who is doing all of this buzzing? Not surprisingly, the busy workers are often members of our very own community, in conjunction with Habitat for Humanity.

Jim Killoran, the Executive Director of Habitat for Humanity, Westchester, is the tireless source of inspiration and perspiration as he works toward ensuring that everyone in Westchester has a home in which to live. Bill and Keiko Spade–resident architects who have dedicated countless hours advocating for safe and responsible affordable housing here in town–joined with Killoran in the genesis of the first Habitat project in New Castle.

Many residents have fond memories of the nursery school, but might be surprised to learn that the “Queen Ann style” building which features an elevated porch with decorative scrollwork was actually constructed in the late 1800’s as the Quaker meeting house. The reconstruction will restore the building to its original “Stick Victorian” styling from 1885, while also maintaining the original post and beam framing. Per Spade, “This will enhance the quality of the surrounding neighborhood, which has other fine examples of architecture from this same period.”

Teaming up with Habitat was a no-brainer for the Spades. They’ve been “green” in their building techniques for years, attending Passive House trainings to save precious energy and utilities while saving families money as well. Having worked with Killoran on a number of homes, they were aware of the green homes built by Habitat.

For 300 King, the Passive House features will include a thickened exterior “envelope” with up to three times the insulation value, sophisticated moisture and air barrier layers, highly insulated doors and windows, and an Energy Recovery Ventilation unit which circulates fresh air while recovering energy. Solar panels are being considered, as well as rain barrels, which save water runoff and usage. Spade added, “We look forward to sharing the process of building these Passive Homes with the community, to educate the broader community about the importance of energy-efficient construction.”

Per Spade, New Castle has been very supportive of the project, which will add two units of affordable housing toward meeting the county settlement of 2009. The units will be condominiums owned by families, something that Killoran is very proud of.

“Ownership creates the bank for each family. As ownership happens, studies show that education goes up and wealth of families goes up.” Killoran also pointed out that the former property of the Lutheran church will now be back on the town’s tax roles. It is expected that construction, depending on the availability of funding and volunteers, will take between nine months to a year, with a target occupancy date of early 2017.

In the meantime, three or four days a week the active site is under the watchful eyes of Habitat site supervisors and volunteers as the deconstruction phase winds down in preparation for the rebuilding phase. Killoran speaks of “habititis,” where people of all ages are drawn into helping with everything from building, fundraising, and providing snacks for workers.

“Habititis is moving throughout Chappaqua and Northern Westchester. Everyone is a philanthropist and volunteer and all can help,” he urges. Killoran’s catch-phrase is “The excitement is building!” Habitat has built throughout the county in addition to helping more than 1800 homeowners affected by Hurricane Sandy, delivering generators as well as working on homes. First building in Larchmont in 1988, Habitat continues to build, help rehab homes, and is currently designing “aging in place” opportunities to help create an intergenerational New York “so all generations can continue to live in Westchester and New York, and not have to leave.”

Indeed, the excitement is building, pun intended. Many groups have already helped in this effort, including West Point cadets (all fed by the generosity of Lange’s Little Store), several groups from high schools and colleges, families both in town and from other parts of the county, faith communities, offices, and local merchants. The trend has been to “bring a friend” or several friends, and spend a few hours working diligently in the company of kindred spirits. There are “regulars” (including this author) who enjoy seeing the building as it progresses, while fostering new friendships.

Not sure if you have the know-how to build? Killoran’s staff are more than happy to help. From the proper way to measure and cut to using building equipment such as circular saws and jackhammers, you will be in good hands. Skills learned at Habitat are also quite handy for use in your own homes as well. 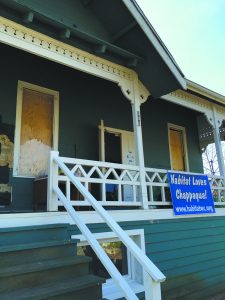 In addition to this location, work has begun on the latest town project at 437 Saw Mill Road in Millwood.Each unit can cost $250,000 to rehab and make beautiful for families, and Killoran asks that each volunteer give a dollar, or ten, one hundred, one thousand, or more. “Whatever they can give, so we can continue to build strong into the future.”

To help with all the ongoing efforts, contact Chappaqua@habitatwc.org and donate: habitatwc.org

Eileen Gallagher is a freelance writer and 13-year resident of Chappaqua. Married with two sons, she has a full-blown case of Habititis along with her husband Michael. They can often be seen wearing hardhats and goggles working and laughing at 300 King Street.