The Harvey School announces that Grammy Award-winning Lew Soloff, former member of Blood, Sweat and Tears, will appear next month as a special guest in the community venture called Harvey Presents. Soloff, a virtuoso trumpeter who has played with immortals in the music world, has assembled an outstanding band of top jazz musicians. The show is set for Saturday, Dec. 13, at 8 p.m. 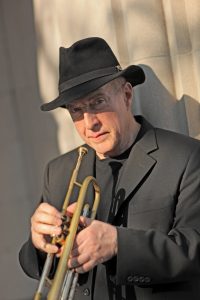 Lew Soloff, a Brooklyn, N.Y. native and former Bedford resident, graduated from the Eastman School of Music in 1961 and immersed himself into the New York City jazz scene. Playing in bands led by jazz artists such as Maynard Ferguson, Tito Puente and the great Gil Evans, Lew Soloff later became known in the pop world during his time with the ground-breaking group Blood, Sweat and Tears from 1968 to 1973. It was his searing horn lines in “Spinning Wheel” (1969) that garnered a Grammy for Blood, Sweat and Tears, a group that produced nine gold records. This classically trained trumpeter has played with many top stars in the music world, including Gil Evans, George Benson, Lionel Hampton, Herbie Mann, Tony Bennett, Aretha Franklin, as well as Barbra Streisand and Frank Sinatra.

Lew Soloff has gathered an outstanding group of musicians together to play with him. Singing and playing saxophone will be Grace Kelly who, as a bandleader, has played in more than 600 concerts worldwide and has performed or recorded with artists such as Huey Lewis, Harry Connick, Jr., Dave Brubeck, Gloria Estefan and Wynston Marsalis, to name a few. On piano will be David Budway who has recorded and performed with Branford Marsalis, Michael Brecker, Stanley Turrentine, Hubert Laws and Jeff “Tain” Watts. On bass will be Essiet Essiet, once a member of Messengers, who has also played with Famoudou Don Moye, Abdullah Ibrahim and in Bobby Watson‘s band Horizon. Ron Affif, who will play guitar, has recorded five albums under the Fantasy record label and formed the Ron Affif Trio with Essiet Essiet as his bassist. Rounding out the band will be drummer Victor Lewis who has performed with many top artists, including Woody Shaw, Carla Bley, David Sanborn, and Dexter Gordon and was a member of Stan Getz‘s quartet.