From January 23 through April 30, the Radius Gallery at Arc Stages in Pleasantville is going to give you a front row seat to a behind the scenes look of the Broadway stage. From the Wings: Broadway Behind the Scenes comes courtesy of Chad David Kraus and the five years he has spent documenting the day to day of numerous shows.  So just imagine an actual camera stealthily perusing the landscape of a big time production and putting you in the photographer’s place. But that’s not quite how the Pleasantville resident has gone about conveying the heart and soul of the Great White Way. 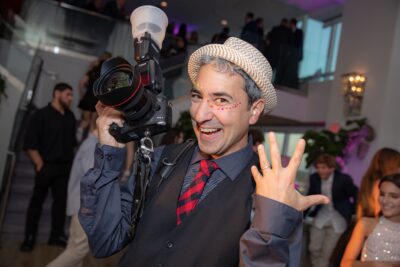 “I get to know a lot of the actors really well throughout the process,” Kraus said. “I feel like In many ways I’m part of the team,” and as a result of the connection, people are put at ease. A real true display of emotion then emerges, he added.

The very nature of Broadway already gives him a pretty good lead in.  “They have all been incredibly kind and caring people. I’ve worked with Tony Award winners Lin-Manuel Miranda, Ben Platt, Kristen Chenowith, Lauren Patten, and Katrina Lenk, and they all show the utmost respect for everyone involved in bringing a piece of theater to life, Kraus said. “Whether that be their interactions with a make-up artist, costume designer, stage manage or photographer, the theater community that I’ve been around has embodied nothing but inclusiveness.”

He’s certain that the true spirit of collaboration and emotion will come across at the Gallery, and so will an insight into the nuts and bolts of any artistic endeavor.  “My hope is that the exhibit will give people who love the arts and love theater an insider view into the whole process,” he asserted.

That said, Kraus’ own passion puts him very good position to deliver.  Growing up on the Upper West Side, the city kid got to know the guys who owned a little one hour photo, and a strong interest developed. Self reliance then got him on his way.  “I saved up money from the lemonade stand I had and bought my first camera,” said Kraus.

However, the hobby aspect of photography remained into adulthood. He studied theatre in college, and afterwards, became a sales rep for a record company.

The needle eventually skipped a beat when making a photography career serendipitously appeared in a flash. Kraus was at a Bat Mitzvah, and according to the hosts, his pictures were better than those of the photographer for hire. “That was my light bulb moment,” he revealed, and first posting on Craigslist about 12 years for events evolved into a full time business with five other photographers in tow.

The Broadway gig took flower via his brother. The VP of a major digital marketing firm, their search for a photographer to do social media marketing and campaigns for Broadway shows landed on Kraus.

Grateful for the lucky break, a portion of the sales of the framed prints will go to Arc Stages, and either way, hoping for a good turnout on opening night is good for everyone, according to Kraus. “It will be a nice time to gather with friendly faces and support the arts,” he concluded.

Rich Monetti has been a freelance writer in Somers since 2003. He spends most of his time on the sidelines at John Jay covering high school sports.