When Elks member and Armonk resident Arthur Adelman saw the work, he immediately thought of the Hergenhan Recreation Center as a perfect destination.

“I knew right away that the seniors in the Hergenhan center would really admire it and love it,” Adelman tells Inside Press. “And in fact, I brought it there and showed it to them and they were all amazed and loved it.” 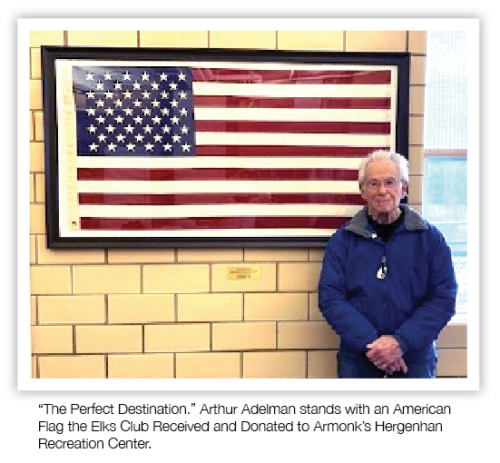 The Elks first planned to hang the crocheted work–whose origin is unclear–in the center but decided otherwise after realizing that it was not in the best condition. The episode brought to light, however, that there was no American flag in the building, which is used for a wide range of meetings, gathering and community events.

“We all thought that it was a great idea,” Adelman said. “We just needed a better condition flag.”

As of this January, a 4-foot-7-inch by 4-foot-6-inch American flag now hangs in the center thanks to a donation from the Elks lodge. The flag is displayed in a frame with plexiglass along with a plaque that reads “Donated by Mid-Westchester Elks Lodge # 535 Armonk, NY.” A commemoration ceremony was originally set for January 20 but was delayed due to snow.

While the flag itself was not particularly expensive, the framing and plaque put the cost upwards of $1,000, according to Adelman. As a patriotic organization–one that supports several veterans’ organizations and initiatives–the Elks were eager to make sure a flag is proudly displayed at the center.

The lodge also hope that the commemoration and the prominent display of Old Glory sparks further recognition for the 154-year-old Elks, a charitable and patriotic organization open to all American citizens, and leads local residents to think about joining the group.

“The two purposes are visibility and recruitment,” says Adelman. “Younger people these days don’t join organizations as much. So our priority, and the reason we are doing this, is to let everybody know in North Castle and beyond that the Elks exist.”

The Mid-Westchester Lodge was initially three separate lodges–one in Mt. Kisco, one in Port Chester, and one in White Plains–with each lodge having its own building. But in March 2009, with membership declining, the three lodges merged to form one central lodge. The Elks now meet on the second and fourth Wednesdays each month at the American Legion in Armonk.

The sale of the three properties, however, left the Mid-Westchester Lodge with a sizeable war chest. This has allowed the organization to fund a range of activities and initiatives.

“The motto is ‘Elks care, Elks share.’ And fortunately because the three lodges that constituted our lodge all had buildings and sold them, we have a very nice treasury and we can afford to be generous.”

The pandemic initially forced the Mid-Westchester Lodge to move most of its meetings to Zoom in 2020, but once vaccines became widely available, they were able to resume in-person meetings while masked and socially distanced.

“That’s worked out fine,” Adelman says. We’ve not really had a diminution in attendance.”

A changing world–one which the online metaverse has made smaller while at times weakening the bonds between neighbors–has challenged community-based organizations like the Elks. But Adelman hopes that anyone willing to give their time and service to help their community considers the Elks.