Article and Photos by Matt Smith

It’s been said that if opportunity doesn’t knock, you should build a door. And bright and early on May 17 in the rear parking lot of Chappaqua Train Station (Allen Place), that’s, in a matter of speaking, exactly what Chappaqua residents and car enthusiasts Sam Matluck and Sam Birenbaum did.

After years of regularly attending car shows in other towns, like the famed “Concours d’Elegance” in Greenwich, Connecticut, and New Caanan’s “Caffeine and Cabureators,” the two Greeley students decided the time had come for such an event to occur in Chappaqua.

“We did some research, we called the Town Board,” and the First Annual “Bevs and Revs” Chappaqua Car Show was born, explains Matluck, 16. “We then went on Facebook, Instagram, put flyers around town, sent e-mails, and just said ‘spread the word.’”

The boys explained that there was no specific, town-associated reason fueling the idea for a car show; it was simply something they wanted to do. “We just thought of it!” said Birenbaum, 17. “We grew up here, we live here, we’ve been around these cars….we said, ‘Let’s do a car show!’” Nodding in agreement, Matluck stressed the importance behind the necessity of the event: “There hasn’t been a car show here… we needed a car show.”

Scott Belkin, uncle to Birenbaum, on the other hand, speculated that the impetus for their planning the event stemmed purely from their enthusiasm about the subject. “Not only does it come from their aptitude and desire to own these cars, but it’s simply pure passion,” he said. Supplements Birenbaum, with a smile, “[We’re doing this] not because [the cars] are expensive or anything like that, it’s just because we love them! These are our babies.” 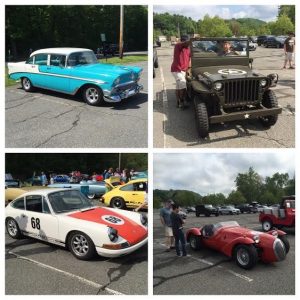 Both boys expressed how their families have been supportive of their passion and their eagerness to develop this community event, and have provided much assistance in developing the idea from a paper proposal to a reality in the train station parking lot. But make no mistake — despite the help, the event was entirely conceived, spearheaded, and brought to life by the two young men. “Their idea, their work, I just made it legitimate,” clarifies Robert Matluck, father of Sam. “We planned this whole thing ourselves,” reiterates the younger Matluck. “I met Sam in December, and we’ve been planning [it] ever since.”

The event itself was certainly exciting. Attendees could grab a cup of coffee and a donut, compliments of Chappaqua Dunkin’ Donuts, before perusing the lot, which boasted a variety of classic Corvettes, Mercedes, Dodges, and military Jeeps, in addition to a vintage Ford Mustang, a Thunderbird Convertible Roadster, a classic Carrera, a 1968 Porsche, and a modern motorcycle.

A few car owners brought vehicles with special value; Frank Madonna of Pleasantville, NY, proudly displaying his 1969 Yenko Chevelle, shared, “It’s the same car [model] I had when I was in high school.” Some cars were for sale, others just for show; regardless, it was an enjoyable morning for all, that met the goals the boys had set: “We wanted to create a place where people can show their own automobiles, but also meet others who share the passion for all things cars,” says Matluck.

Though the Sams explain that some participants pre-registered their cars — “they e-mailed us with their name and their cars” — about “25% of these cars are [here because of] word of mouth,” meaning they just drove in that morning and parked their car for display. As a result, the lot was, much to their surprise, more or less filled within half an hour. “I wasn’t expecting this much [of a turnout],” says Birenbaum in response. “It’s pretty cool.” Comments Matluck, “Next year, we’re gonna have to get a bigger lot. [We hope] it’s gonna grow and grow and grow.” At the end of the day, it’s certainly a good problem to have, and certainly works in favor of their proposal to make the car show an annual affair.

Belkin adds, on the thought of improving or embellishing the event for future years, that if it is indeed greenlit to be held annually, “it’ll probably turn into a charity event.” To that end, in support of that idea, while admission to this year’s event was free to all involved, donations were accepted throughout the morning for the “Hands Off the Phone — On the Wheel” campaign, which advocates for driving without distraction.

The elder Matluck is also very much in support of making the event an annual affair. Praising the boys for all their hard work, he articulates a similar feeling toward returning to the train station parking lot: “We hope to do it again. Maybe even [later] this year.” And why not? “I thought it was [a] fantastic [idea],” Robert concludes. “And the weather’s great… everything worked out. I think it’s a win for everyone.” After witnessing the jolt of energy the event brought to the community that morning — not to mention the impressive array of vintage and classic cars among neighborhood residents — we think so, too. Well done, boys. Hope to see you starting your engines for another event sometime soon.

Skidmore grad and longtime Chappaqua resident Matt Smith is a regular contributor to The Inside Press.