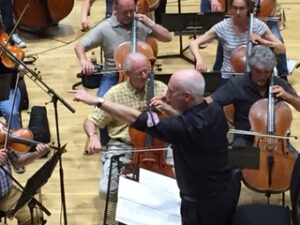 More than 20 years ago, longtime Chappaqua resident Michael Shapiro found himself thumbing through a poetry compilation about the Holocaust written from the perspective of Jews in countries such as Greece, Italy and France at at the United States Holocaust Memorial Museum in Washington DC. The compilation, And The World Stood Silent: Sephardic Poetry of the Holocaust, chronicles the life of nearly 160,000 Sephardic Jews exiled from Spain in 1492 and who ultimately perished in the Holocaust.

At the time, Shapiro’s work focused primarily on curating concerts featuring music of Jews who had fled the Holocaust and emigrated to Hollywood such as Erich Wolfgang Korngold who scored several films most notably The Adventures of Robin Hood. Shapiro also organized concerts featuring music from composers who had lived in Teresienstadt, a ghetto in Czechoslovakia–a hotbed of musical creativity with composers such as Gideon Klein, Pavel Haas, Hans Krása and Viktor Ullmann residing there.

Shapiro lost about 75 members of his own family among the six million Eastern European Jews massacred during the Holocaust. He yearned for the chance to immerse himself in how the Holocaust impacted Jews in the countries included in the poetry compilation and to share his own family history. Shapiro was immediately moved by the literature. “The poetry hit me completely. It was so powerful,” recalls Shapiro. A few years ago, conductor Deborah Simpkin King of Ember Choral Arts, inspired him to write the 60-minute plus work and is conducting Shapiro’s piece, which took him just seven months to write. “It flew out of me,” explains Shapiro. Shapiro was intentional in having the piece be a requiem. “Nothing gets to people like the sound of a chorus with an orchestra,” he noted.

Shapiro has written more than 100 works for orchestral, theatrical, film, chamber, choral and vocal forces throughout his career. His works have been performed by many of the greatest orchestras and performers in North America and Europe and for years he served as the conductor of the Chappaqua Orchestra. His music has been played on BBC, National Public Radio, SiriusXM and is available on major platforms such as Spotify and Apple Music.

Shapiro has always been interested in exploring themes such as prejudice and racial divisiveness in his music. In fact, one of Shapiro’s most well-known pieces is the score from Frankenstein which has been performed more than 50 times internationally. “I think I was attracted to Frankenstein because I was interested in the way the monster was depicted and treated as the other.”

Shapiro hopes his “Voices of the Holocaust” concerts “give a voice to people who no longer have a voice.” While the Nazis murdered six million Jews, they also targeted other groups such as Roma (gypsies), homosexuals and people with disabilities. This same hatred is happening today, Shapiro is quick to point out. He felt he had to write the piece now, especially with the number of Holocaust survivors dwindling each year to 300,000-350,000 survivors in 2022 according to the nonprofit Holocaust group, Claims Conference.

The premiere of the piece took place at Temple Shaaray Tefila on November 9th and at Manhattan’s famed Central Synagogue on November 10th. The timing was purposely chosen to coincide with the 84th anniversary of Kristallnacht, ‘The Night of Broken Glass’, when Jewish-owned businesses, synagogues and homes were destroyed by the Nazis in Germany and in Nazi occupied territories in Austria and Czechoslovakia. In the two-day spree of massive violence against the Jews, 30,000 Jewish males were arrested and sent to prisons or concentration camps.

The premiere at Central Synagogue also included a Q & A session with Paul Shaffer, the former musical director and band leader of Late Night with David Letterman. It also featured tenor soloist Daniel Mutlu, the Senior Cantor of Central Synagogue and the American Modern Ensemble. “Mutlu has a phenomenal voice. He really is one of the greatest cantors in the country,” exclaims Shapiro.

The concert will also debut at the Reagan Library in California performed by the Los Angeles Master Chorale and conducted by Grant Gershon. The LA performance will coincide with the Auschwitz exhibition at the library for ten months starting this spring. The moving exhibition originally was showcased at the Museum of Jewish Heritage–A Living Memorial to the Holocaust in downtown New York City. Visit MichaelShapiro.com.

Stacey Pfeffer is a freelance writer and market content writer based in Chappaqua. A former editor of Inside Chappaqua and Inside Armonk, her works have also been published in regional publications and on websites. A granddaughter of Holocaust survivors, she is passionate about raising awareness about it.